A 44 year old woman from Upton, near Didcot in Oxfordshire, has broken a Guinness World Record for being the fastest female to run the London Marathon in a full body animal costume. 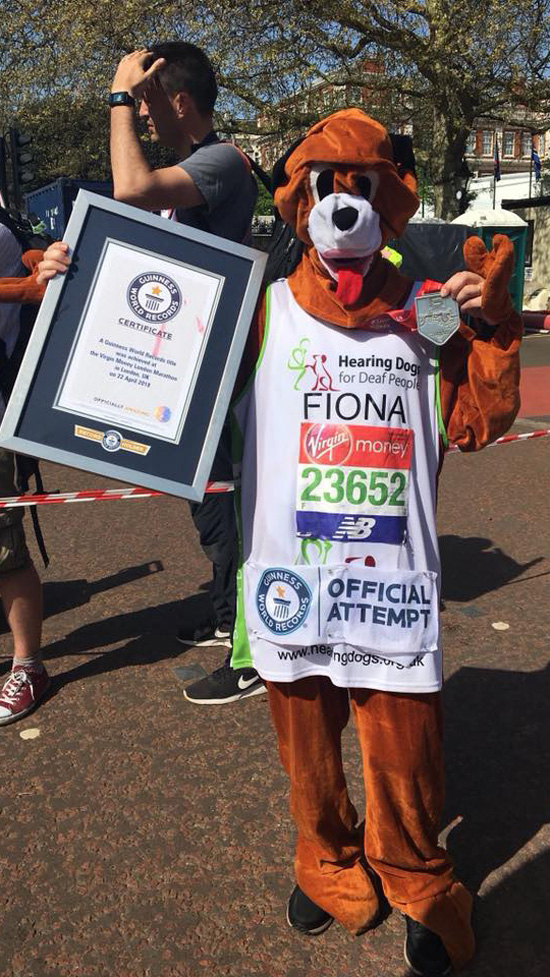 Fiona Betts, a maths teacher at Moulsford Prep School, near Wallingford, was inspired to run this year’s London Marathon dressed as a dog to raise money for Hearing Dogs for Deaf People, a national charity that trains dogs to transform the lives of deaf people by alerting them to everyday sounds and providing them with companionship.

Fiona completed the race in a record-breaking four hours, 13 minutes and 25 seconds, beating the previous record of four hours and 21 minutes, securing her place as the fastest female to ever complete the race while dressed in a full body animal costume.  In achieving this feat, Fiona raised almost £2,900 for Hearing Dogs.

Hearing Dogs for Deaf People is Moulsford Prep School’s chosen charity this year and Fiona has seen first-hand the difference these dogs make to the lives of deaf and hard of hearing people as her colleague at the school is partnered with a hearing dog.

Fiona Betts, said: “I'm an enthusiastic runner and the London Marathon is an incredible event that I’ve run a number of times. My children had been nagging me to do it in fancy dress this year and when I decided to run in aid of Hearing Dogs for Deaf People, running in a dog costume seemed logical.  Going for the world record was the icing on the cake and I thought it would be a good way of raising awareness.

“When I finished the race I felt exhilarated, exhausted and emotional, and when I realised I had beaten the world record I was stunned as I wasn't expecting it at all. The Guinness World Record adjudicator had quite a job convincing me that it was true.  I had some competition from a woman in a horse costume during the race, but somehow, and I still don't quite believe it, I managed to keep calm and cool in the heat and slipped in ahead of the existing record.

“I think Hearing Dogs for Deaf People is a truly amazing charity that makes a huge difference to the lives of deaf adults and children.”

“To run the London Marathon on its own is incredibly impressive, so to do it in a full dog costume in record time is superb.

“Fiona’s kind support of our charity will mean that we can train more lovely dogs to change the lives of deaf people, so we are extremely thankful to her and to all the other runners who chose to run for us.”

For further information on Hearing Dogs for Deaf People and to find out how people can support the charity, visit www.hearingdogs.org.uk.