‘Deafness doesn’t have to be lonely’

Ben Fogle has been appointed an official Patron of Hearing Dogs for Deaf People, the Charity co-founded by his father Dr Bruce Fogle 35 years ago, which has transformed the lives of thousands of deaf people in the UK. 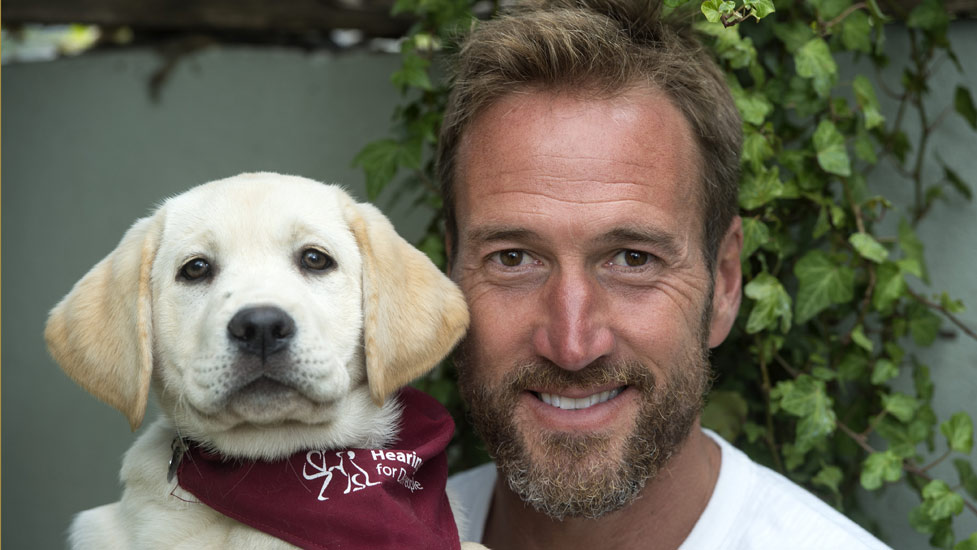 The announcement comes ahead of the UK’s national Deaf Awareness Week (15-21 May) as the dog-loving adventurer and TV presenter launches the Charity’s ‘Deafness doesn’t have to be lonely’ campaign highlighting the enormously positive impact that hearing dogs have on the wellbeing of their deaf recipients, meaning deafness isn’t such a lonely experience.

Perhaps no other form of hearing loss assistance has such a combined profound effect on a severely or profoundly deaf person’s life; from alerting to important sounds and danger signals that can’t be heard, such as the smoke alarm, burglar alarm, doorbell and alarm clock providing invaluable companionship and being an important visual indicator of an otherwise invisible disability.

A hearing dog offers warm, loving, sensitive and loyal assistance creating the kind of life-enriching partnership not possible from a technological gadget; reducing loneliness, isolation, anxiety and stress whilst restoring independence, confidence, self-esteem and most importantly a sense of improved overall wellbeing.

“I’ve grown up as part of the Hearing Dogs family so for me to now take on this official role for the Charity my father cofounded is a huge honour. Through his work, I’ve seen at first-hand how devastating the effects of deafness can be.

“Loneliness and isolation, sometimes driven by embarrassment, lack of self-confidence and self- esteem, can really reduce the quality of life for many deaf people who are left feeling cut off from the world, school, work, friends and family – and can often become quite depressed.

“I’ve met and spoken with many recipients who have told me their hearing dog has quite literally given them their life back; their independence, self-confidence and self-esteem restored and once again happy and enjoying life in a way they never thought possible. And that’s all thanks to these very special little canine hearing dog heroes who have taken away the loneliness of deafness and replaced it with a friendship beyond measure.”

Buckinghamshire-based Hearing Dogs is recognised as a world-leader in breeding and training a variety of different types of special clever canine heroes to be hearing dogs including spaniels, poodles and Labradors as well as breeding their own ‘cocker-poos’.

The special ‘hearing dog’ jackets worn by hearing dogs in public let people know about their recipient’s disability, helping to significantly increase confidence when facing the outside world. This can help turn deafness into a more positive experience, as many recipients feel incredibly proud to have a hearing dog by their side. As a result, deaf people can often overcome their disability to an extent where they can return to education or the workplace.

"I came alive the day I got Teddy", Vincent Wakeling

Vincent Wakeling (53) from Dagenham, Essex, was isolated from the rest of the world – until his hearing dog Teddy came along and completely transformed his life. 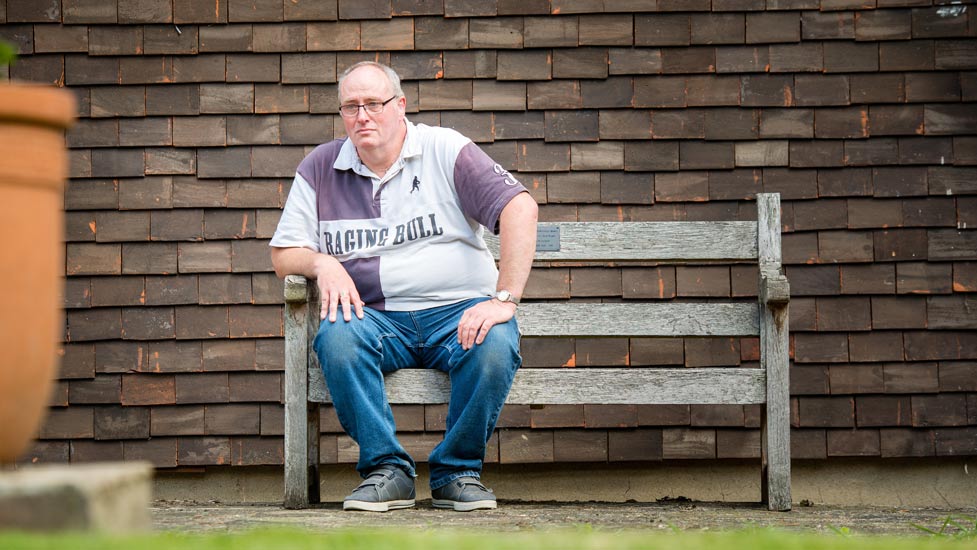 He describes the isolation of growing up as a deaf child, the loneliness of being a deaf adult and how his hearing dog Teddy has helped him to enjoy life for the first time.

“We were five years old when my twin sister and I were sent away to a boarding school for deaf children. I had to wear a large hearing aid strapped to my chest with a harness, and ear moulds made of glass which really hurt, I hated them.

“To stop us using sign language and encourage us to speak we were made to sit on our hands. When Mum saw how unhappy we were, she took us away and got us into the local school instead.

“My sister and I were the only deaf children in our new school, and so felt isolated from the other kids.”

"Trying to listen was exhausting and took all my energy. The teachers would criticise my speech because it wasn’t good enough. It was hard to have a voice so I retreated into having no voice as that felt safer. It was a very lonely childhood."

“This loneliness continued into adulthood. I’ve always felt isolated, especially in social situations. I feel sad I can’t communicate easily with people. I’m aware that they feel awkward and that makes me feel bad too.

“When I left school I had no qualifications and got a job restoring books, but it was a terrible place and I couldn’t work there anymore. I then hit a really low point in my life."

“I’d always had my mum and dad who were my rock. Then my dad passed away, followed soon after by our family dog Bodger and I became very depressed.

"My sister had moved away, but I’d always lived at home with my parents. I was very close to my mum, especially after dad died, so when she was diagnosed with dementia it was a terrible shock. She was the only person who could understand me and help with communication.

"As Mum became more dependent on me, I became more afraid of the future. The isolation I felt without Mum’s help was terrifying. I remembered what a big support Bodger had been to me and decided to apply for a hearing dog. When Mum died, the thought of this kept me going." 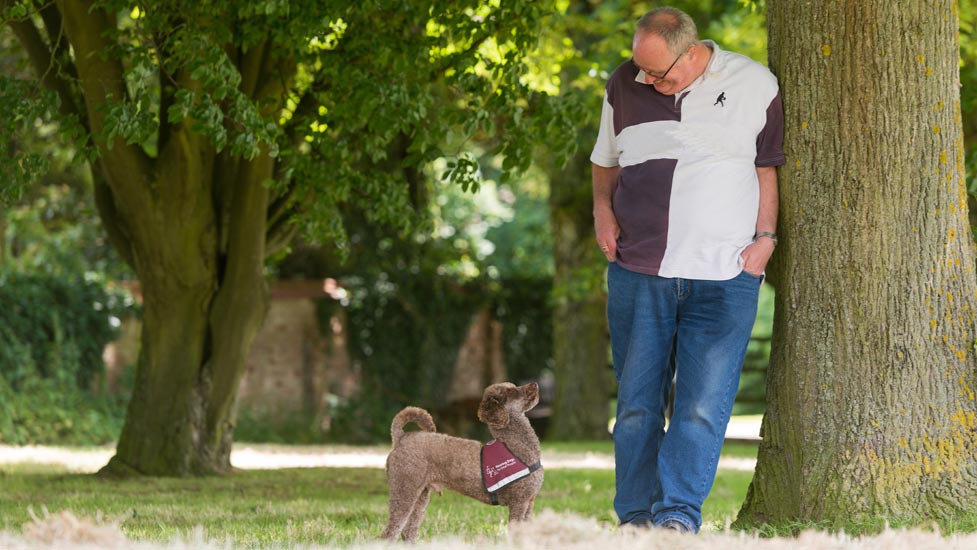 “The day I went for training with Teddy was the day my life started. Taking him to the park for the first time was such a special moment. As soon as I blew the whistle, he came straight back to me. I realised my life had changed forever and I would never feel alone again.

"From that day on I’ve grown more and more confident. I now go into shops – I never did that before Teddy."

“He’s taken away the fear”

“Never in my wildest dreams did I think the fear of everything would be taken away. For so many years I’d had fears about all sorts of things; I was afraid of life itself. But when I got Teddy I didn’t feel frightened any more.

“Teddy has brought me into contact with people and I’ve made new friends because of him. No one talked to me before I got Teddy. I felt invisible. People are kinder to me now. When I go into town with Teddy and I say I’m deaf, people stay and chat – before they’d have just walked away. He’s completely changed my world; made it so much better.

“The most important thing Teddy does is make me feel like a useful member of society. I no longer feel like I’m on the outside looking in; I’m part of the world at last. I’m thankful beyond words to Hearing Dogs because Teddy has helped me discover life and who I really am – he’s given me an identity, a purpose and made me complete.”

Says Hearing Dogs Chief Executive, Michele Jennings: “We are hugely grateful to Ben Fogle for continuing the legacy of his father in such an official capacity as we focus on the future. It’s an incredibly exciting time for the Charity and I hope that Ben’s support will help us to achieve our  vision of increasing the number of hearing dogs we place to achieve 200 new partnerships a year in 2020 to help meet the growing demand for our service.

There are currently nearly 1,000 hearing dogs transforming the lives of their deaf recipients in the UK.