"Hearing dog Echo was the missing piece to my family's jigsaw."

I’m Zach’s mum, Kirsty. Zach was officially diagnosed as deaf at just three years old and for the first few years of his young life, things were tough – for all of us. We still have challenges, but since hearing dog Echo came into our lives, everything is much, much better. I know Zach’s best buddy is by his side now, looking after him. As a mum, the relief is immense. 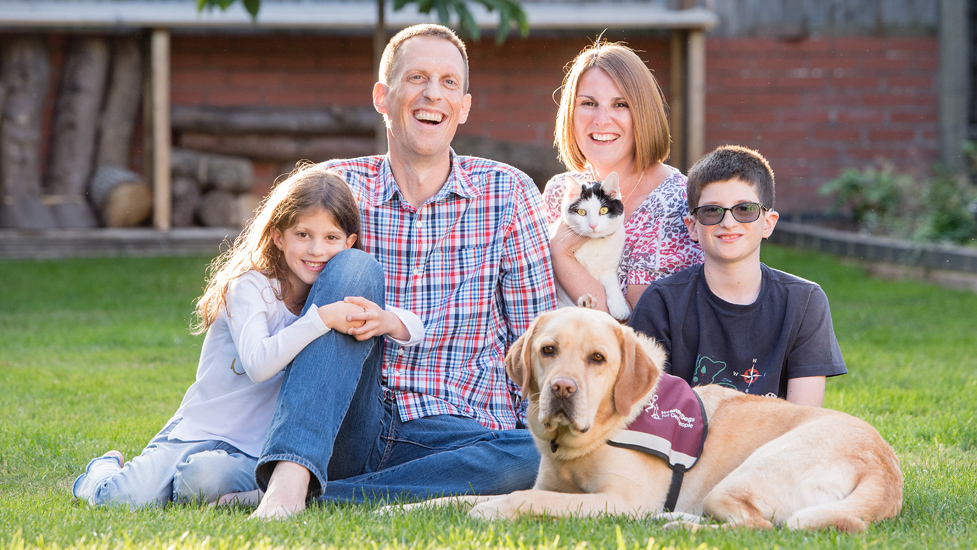 When Hearing Dogs asked if I’d like to tell people about our story, I jumped at the chance. I know this is quite long, but I just want to show you what Echo means to us…

Zach was – and still is – my adorable little boy. He was such a beautiful little baby. Like any parent, I wanted only the very best for him. So when I started to notice that he wasn’t hearing things, I became anxious.

It was at 18 months of age that we noticed Zach wasn’t hearing well. When we called him, he didn’t respond. Loud noises didn’t seem to grab his attention at all. And his language wasn’t developing as it should. 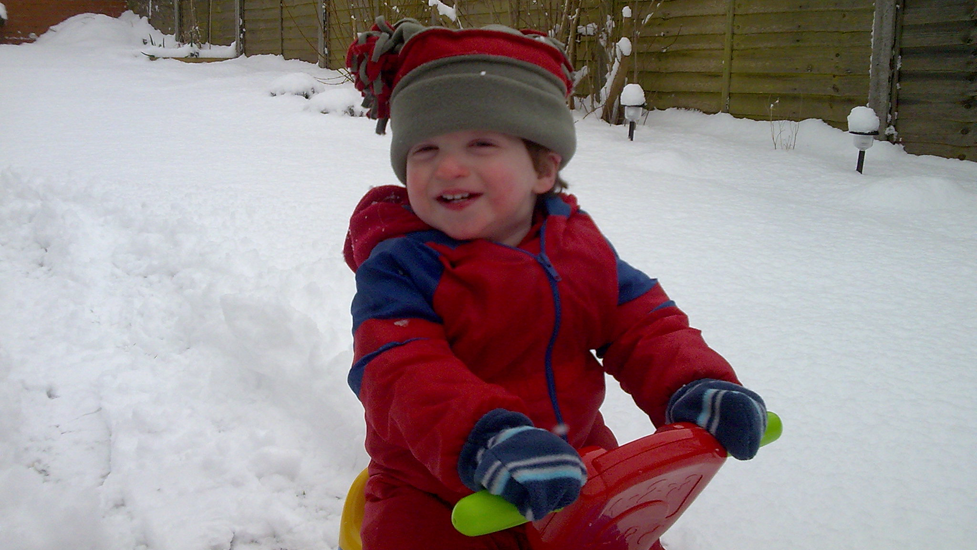 After tests that looked at his brain’s auditory response, we discovered he has Enlarged Vestibular Aqueduct Syndrome – an inner ear condition that affects balance and hearing. He was 50% deaf in both ears. We were told that this could mean total deafness for Zach eventually.

The professionals around us were amazing, but I felt so devastated for my little Zach. I wondered to myself: how would he cope without being able to hear? How would he learn to speak properly? Would he have friends? Would he have a family?

And so, aged nearly four, Zach just had 18 words.

Hearing aids helped, but he was already lagging behind other children, simply because his language wasn’t developing at the same rate. So, we got him support so he could attend a mainstream school. That, plus intensive speech therapy, helped Zach immensely.

But he still had challenges. He couldn’t pick up on conversations. He didn’t like to play along with other children’s games in case he misheard the rules and got them wrong. He didn’t want to go into the garden on his own. He preferred to be near me so he could hear me. 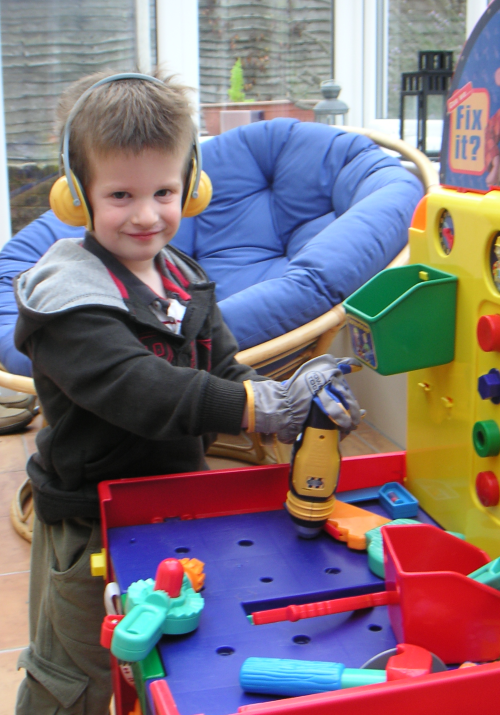 This meant his beloved train track which lives upstairs was only available when an adult could go with him. What little boy wouldn’t want to go and immerse himself in an imaginary world with his train set?

As Zach grew, he started talking about his fears. He told me that he worried I might leave the house and wouldn’t hear me telling him (which I would never do). He fretted that he might miss out on treats, if I said there was cake in the kitchen and he didn’t hear me. This is such a big thing to a little boy.

I saw Zach lose confidence as he got older. He was overlooked for games. He wasn’t invited to birthday parties. It’s a very difficult thing for a parent to see.

I remember two things that particularly upset him – and me. Once, someone was trying to get past us on the pavement. Zach didn’t hear them, and didn’t move out of the way. Cue criticism of me for not bringing up my ‘rude’ children properly. On another occasion, he nearly caused an accident on a playground slide simply because he couldn’t understand what other children were saying, and they couldn’t understand him. Again, criticism from another parent telling me he had no right to be there if he couldn’t communicate.

It was embarrassing, shocking, devastating. It affected me a lot. I was very careful after that to make sure that we only went to playgrounds at quiet times. I really didn’t want to have any more confrontations with people, both for my sake and for Zach’s.

I was doing what any mum would do: protecting my child first, myself second.

Zach also went from being a great sleeper to it being a huge problem. He said that if he closed his eyes without his hearing aids in, he might not see or hear a burglar. He couldn’t hear us moving around the house, so he felt really alone in the dark.

He started going to bed with his hearing aids in. Then he wanted music on. Then a light. Then he wanted someone with him in his room. We moved his younger sister into the same bedroom and this helped for a while, but then it all started escalating again.

Zach began to experience night terrors. He shouted and screamed, twisted and turned. Whenever I tried to comfort him, he would recoil, oblivious and scared. As a mum, my every instinct was to protect him, but everything I tried made it worse.

Every day felt like a fight for survival through tiredness and fear of bedtime starting all over again.

It affected everything, day in, day out. He would just about be able to make it through a school day, with very little time for reading or homework. He certainly had no time or energy for clubs or sports activities after school.

It was a no-win situation.

But then everything changed. And I really do mean everything. Because Echo the hearing dog came into our lives. He was the missing piece in the jigsaw that made our family complete.

It was at a school function, a lady approached me who was keen to find the parent of the child who was deaf. She worked for Hearing Dogs and wanted to make sure I knew that they could help children too. I didn’t then. But I do now.

The minute we met Echo, we knew he was right for Zach. 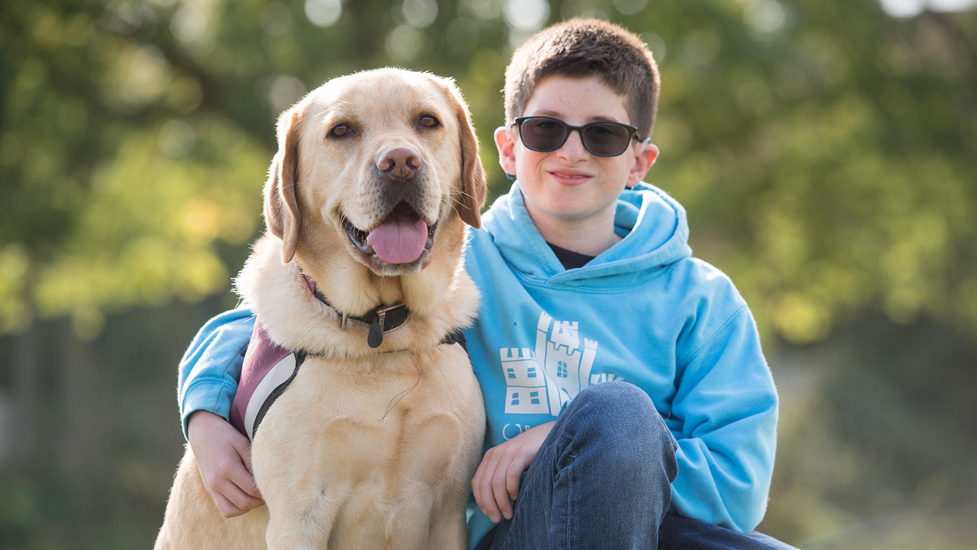 I still get emotional today thinking about it. In came this big bundle of yellow fur, a big, friendly presence that just seemed to make the room feel ‘safe’ somehow. That night, out went the hearing aids, the music and the lights. Zach didn’t need them. He said “Echo will keep me safe,” and that was the end of that!

We took Echo into school so that Zach’s year group could meet him. As a teacher was about to tell the school about him, Zach stood up instead, and introduced Echo to everyone. He explained about soundwork – how Echo alerts Zach to sounds by nudging him with his nose – and how it helped him. He took questions. He asked if any children wanted to stroke him. We all stood there open-mouthed at this confident child who had appeared from nowhere.

That confidence is still there. Zach starts conversations with people, especially when we’re out walking Echo. He goes out into the garden to play now, happy and fresh. He spends time with his train set, absorbed rather than anxious. He knows that, if I need him (if there’s cake for example!), I’ll call Echo, and Echo will tell him with a friendly nose-nudge.

When we’re out together, Echo wears his burgundy Hearing Dogs jacket so proudly, it tells everyone that Zach is deaf. No more comments about rude children or bad parenting. 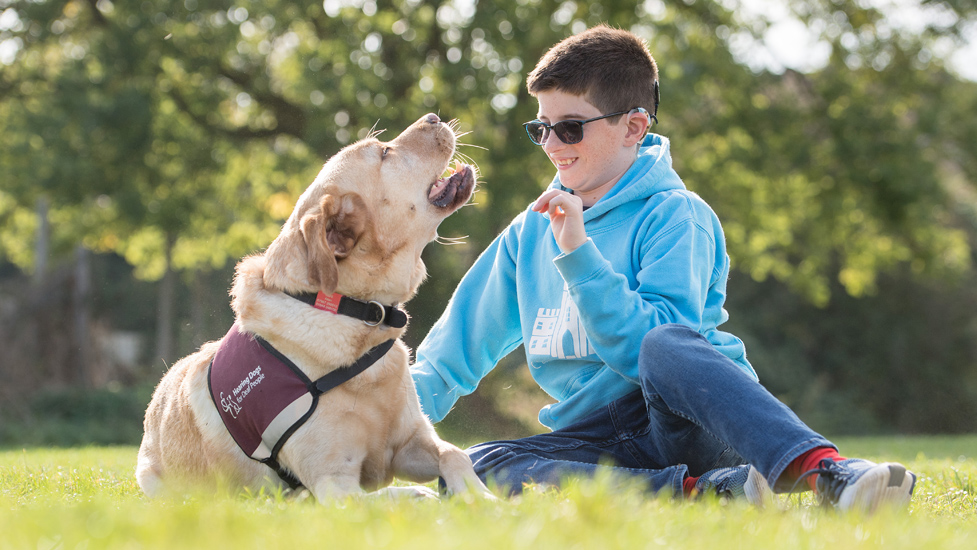 His sleep is so much better too now. He has enough energy to take part in clubs a couple of times a week. He feels free and easy, and part of the world around him. He recently went on a week-long school residential trip to the Isle of Wight. The difference is incredible.

We still have challenges however. As we had expected, Zach’s hearing has deteriorated, and he’s needed surgery, tests and assessments. He also still occasionally has night terrors too. But Echo does an amazing thing to help with them.

We had a babysitter one night, and Zach had a night terror. The babysitter, like us, found it difficult to get through to Zach to help him calm down. However, Echo knew exactly what to do. He pushed his way onto Zach’s bed and wiggled his big, soft head under Zach’s small hand. Zach stopped screaming. He laughed, stroked Echo and then rolled over. Echo stayed exactly where he was until Zach was asleep then calmly went back to his own bed. 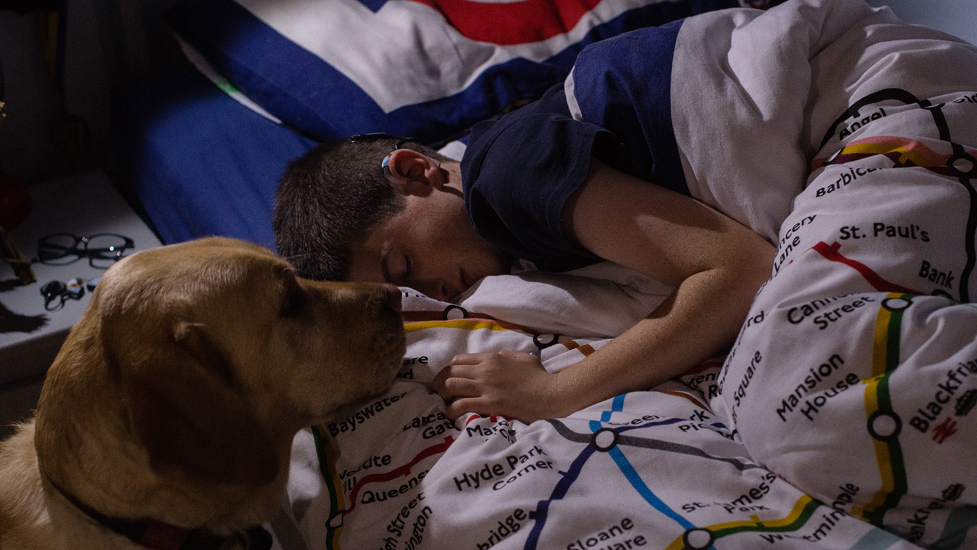 Echo hadn’t been taught to do that. He just seemed to know it was what Zach needed.

Our babysitter was so amazed by this, he’s since persuaded his own family to become involved with Hearing Dogs, because he wanted to help make such a huge difference to someone’s life.

I’ve already said a lot in this letter I know, but if you don’t mind, as our thoughts turn to the festive season, I just want to tell you about how Echo has helped with Christmas.

Before Echo, Christmas holidays could be tough for Zach. He suffers from vestibular sickness, which is brought on by fatigue. It’s like car sickness, without the moving. The last thing Zach needs is lots of people around. So, instead of joining in conversation around the table, he would take himself into another room, just to reduce the confusion around him. This would leave him feeling so sad and lonely on such a special day. No child should feel alone at Christmas.

Now, with Echo, he has so much more energy to enjoy the day. He still needs quiet space away from all the noise but he takes himself off with Echo, his ‘best friend’. He no longer feels alone.

He’s such a huge blessing to us all.

Thank you so much for reading about Zach. I just wanted to tell you how important this big, friendly dog has been to this little, brave boy. And if you would like to make a donation, of any size, it would help another deaf person simply live the full life they deserve.

Whatever you decide, I hope you have a wonderful Christmas, surrounded by loved ones, happy together and looking to the future with confidence – like Zach will be. Like I, his grateful, thankful, loving mum, will be too. 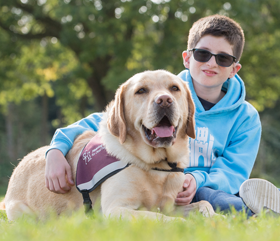 You can help another deaf person

You can help us train another hearing dog hero like Echo by making a donation today. However big or small, your gift will make a real and lasting difference to deaf people. Thank you.
I'd like to make a donation