Richard and his beloved wife Lorraine were a team. Richard is deaf, and Lorraine was his ‘ears’. Lorraine was a wheelchair user and Richard was her ‘legs’. They used to joke that together they became one person.

When Lorraine passed away suddenly after 31 years of marriage, Richard’s world crumbled. It was only when Dillon the hearing dog came along that Richard was able to smile again.

Dillon didn’t only alert Richard to important sounds; he gave him hope. Gave him confidence. Made him feel less alone. He was his best friend. 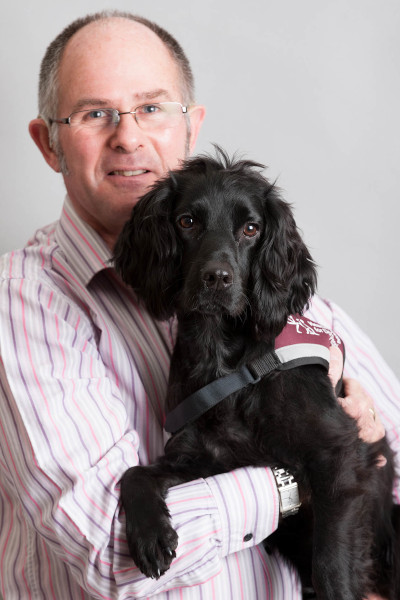 Here he tells his story:

“Dillon came into my life and within weeks I was a different person. He gave me the confidence to get out, to be myself and to live again. Since Dillon passed away, I’ve told everybody that I owe it to Dillon to carry on in the way he showed me. I am trying, and I’m slowly getting there.”

“Dillon had become everything to me. I didn’t know how I was going to cope without him. He had helped me out of all the problems I’d had with depression and sleeplessness. But since he’s gone, I’ve started worrying again. I try to cope but have had to resort to sleeping tablets and anti-depressants.

“What has really hit me since losing Dillon is how isolated I’ve become. People no longer speak to me. When I had Dillon alongside me people would stop and talk to me – even strangers. That’s all gone. It makes me feel invisible. It’s like I’ve lost my identity and that makes me feel very cut off. 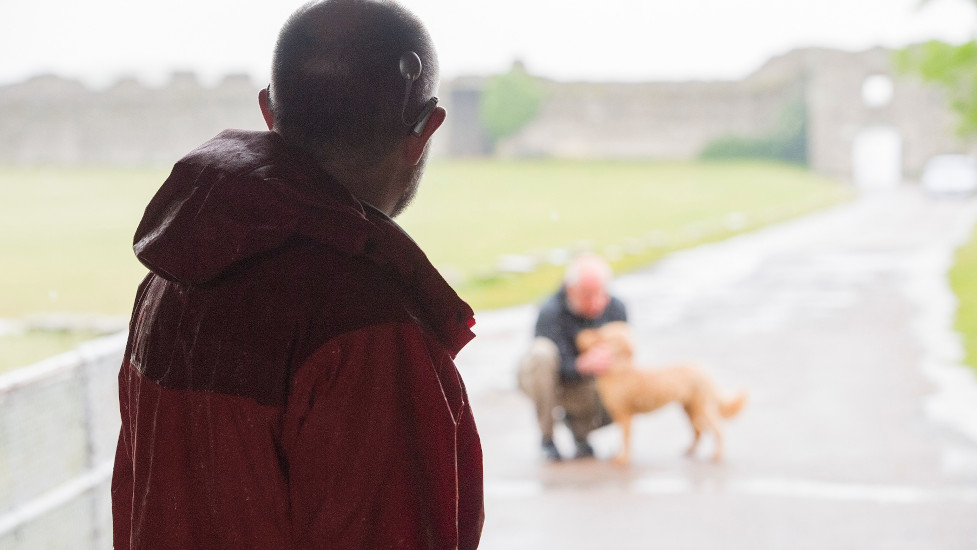 “I used to take Dillon out for an hour and a half every morning. I’ve started making myself go out for walks again. It was hard to start with, but I enjoy seeing other dog walkers. Those who knew Dillon have all been very supportive. This empathy and friendship from fellow dog walkers has meant so much since losing my best friend. There’s just something about being close to a dog that makes all the difference.

“There are times when I feel unable to cope, but I force myself, in Dillon’s memory, to carry on. It’s not easy. But he opened the door to my life, and I’m determined not to shut it again.

“I used to talk to Dillon. I’d tell him all my problems, and he would tilt his head to one side and look at me as if he understood. Wherever I went, whether doing my model-making, or hanging out the washing, he’d wander after me and settle down close by. He was my constant companion.

“Dillon gave me independence for the first time in my life. As a full-time carer for my late wife I was focussed on supporting her to do what she did as a leading campaigner for disabled people. After she passed away, I became reclusive and locked myself away – until Dillon gave me the incentive I needed to get out again.

“That was unexpected. When I applied for a dog it was to have the reassurance that he would alert me if the fire alarm went off at night. What he gave me in excess of that was just amazing. He gave me confidence to do things again.

“I hadn’t realised what was missing until I had Dillon. For six years I relied on him 24/7. Being without him for these past months, it’s really hit me how much he gave me.

“Even out for a walk, if Dillon heard someone behind us, he would look round so I’d know too. All my life I’d suffered with the anxiety of people coming up behind me. Dillon gave me reassurance.

“I never felt lonely when I was with Dillon, but now the loneliness is creeping back, and I can feel myself becoming more isolated. 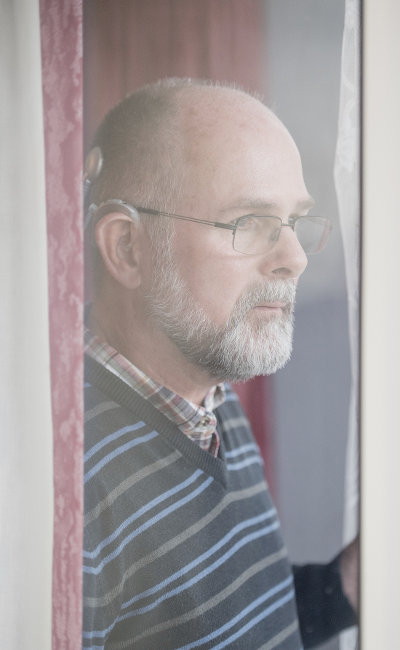 “I know I can never replace Dillon but I long for the companionship and support of another hearing dog. I’ve been told it might take a while, but I really hope it will be soon.

“I want to get back the independence he gave me; the freedom to just pack a bag and go off travelling together, sleeping under canvas. I haven’t felt able to do that without him, because in a tent with your hearing aids out, you’re very isolated. I miss having that reassurance that he’s there to help me if anything happens. He made me feel secure. I just don’t have the confidence to do it on my own.” 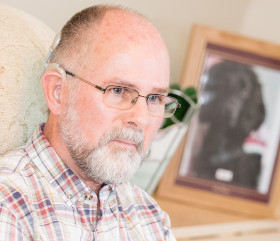 You can help Richard get a new hearing dog

Richard is waiting for another hearing dog, another best friend. Please consider donating to help us train a successor dog for Richard and others like him.However big or small, your gift will make a real difference. Thank you.
I’d like to help Richard