Rayane saved up his pocket money for dog toys and treats. He read books about dogs and watched TV programmes about dogs. Why? Because all Rayane wanted for Christmas was a hearing dog. 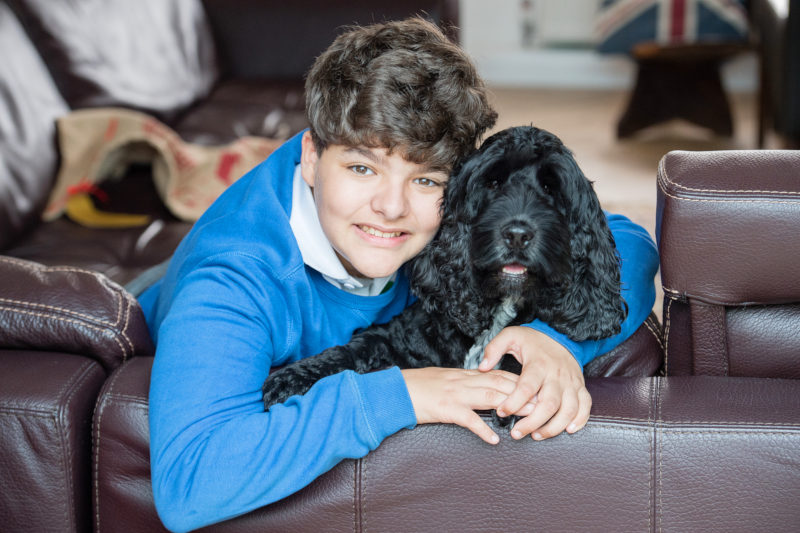 This started when we attended an event for deafness. Rayane saw a hearing dog with a teenage girl. Intrigued, we spoke to her. Besotted, Rayane wanted a hearing dog too.

Rayane knew what to do: just ask Santa!

So he sat right down and wrote him a letter, asking if he could have a hearing dog for being good all year. Not an action toy or a games console. A hearing dog. He was too young back then for his own hearing dog, but that didn’t stop him. Each year at Christmas he wrote another letter. He was sure Santa would get the message eventually! He just needed to be persistent. 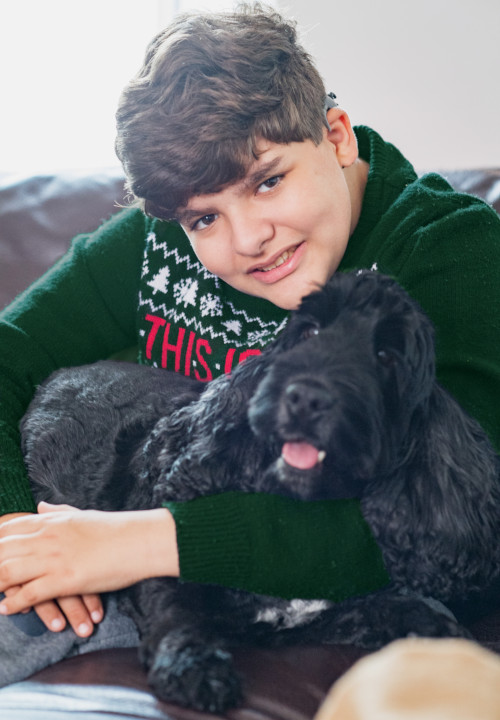 Diesel is Rayane’s constant companion, listening for sounds like the alarm clock and fire alarm, or one of us calling him. By night, he watches over Rayane. By day, he gives him the confidence to make friends.

When Rayane was 18 months old he had a severe asthma attack. He was left profoundly deaf. We were told that it’s impossible for a child to lose their hearing this way, but that’s what happened. He had a cochlear implant fitted six months later, which helps with a sense of sound, but he still can’t follow conversations easily.

As Rayane grew older he had terrible problems sleeping, because he had to remove his cochlear implant at night, and the silence and darkness scared him. So we put a bed next to his, and waited for hours until he slept. He would reach out to check we were still there, and panic if we weren’t. So Rayane was always tired. We all were.

Rayane also lacked confidence. Growing up deaf, Rayane struggled to make friends. He felt really isolated and lonely, wondering why he was never invited to parties or sleepovers. We always made sure Rayane felt loved and included, but communicating and making friends was hard, so he just did things with us. He was happy, but we knew he would need friends as he grew up. It was a real worry.

However, while Rayane was writing his letters to Santa, Diesel was being trained to become a superhero hearing dog. 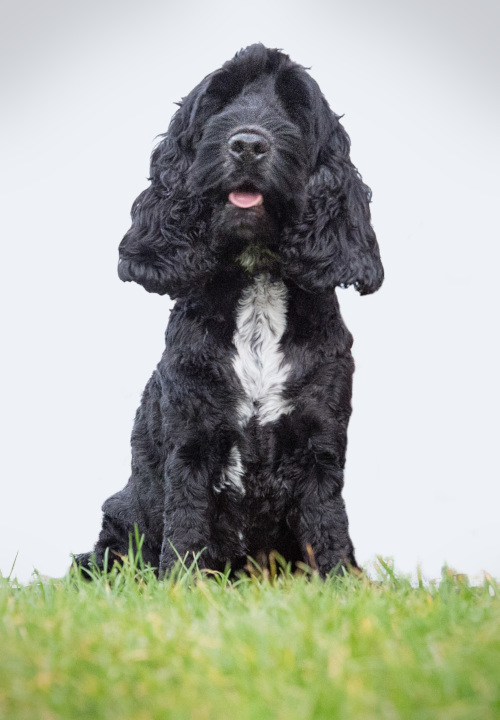 He was brought up by volunteers and trainers to alert deaf people to sounds, while being their loyal, furry friend. Then, Santa did a brilliant job, bringing Diesel into Rayane’s life!

Tomorrow, imagine Rayane with his friends. Diesel got them all talking at first, and now they’re lovely, close pals. Rayane’s happy to tell them when he can’t hear them, which he never would have done before.

Even during the Coronavirus pandemic, Rayane and Diesel will continue to look after each other. In fact, Diesel is helping us all as a family during these tense times. Rayane has also learned a lot about responsibility, and he’s growing up before our eyes, with Diesel by his side.

Now, when you ask Rayane what he wants for Christmas, he’ll tell you – for another child to have their own hearing dog. 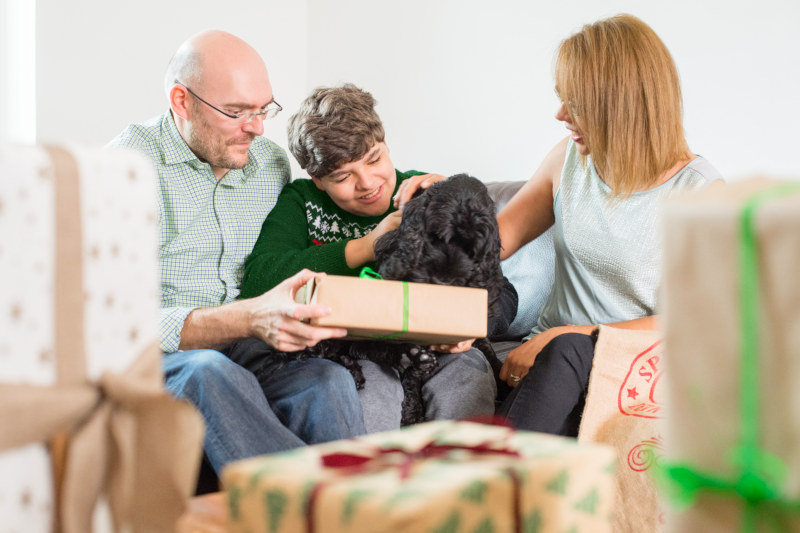 We are so proud of him. It brings tears to our eyes just thinking about it.

Do you think you’d be able to help make Rayane’s wish come true? Would you like to make a donation today, and help another deaf child have their very own Diesel? It would be wonderful to think that another child could benefit the way Rayane has.

This year, we will have a stocking especially for Diesel, and Santa will bring him lots of treats and toys. And we will thank Diesel and Santa – and all the people like you who made this possible.

P.S. You can make Rayane’s Christmas wish come true by donating using the button below. Thank you. 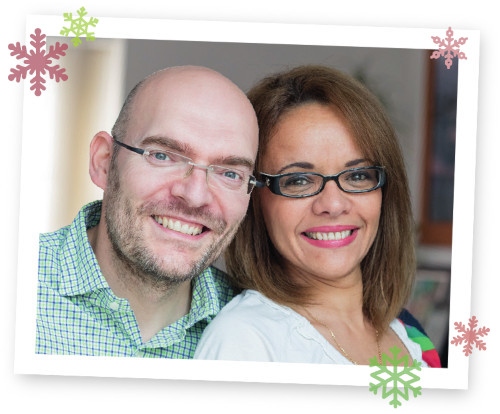 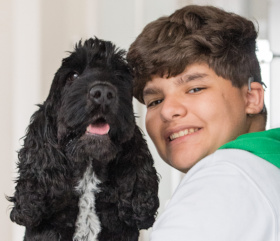 Rayane has kindly shared his letter to Santa this year. 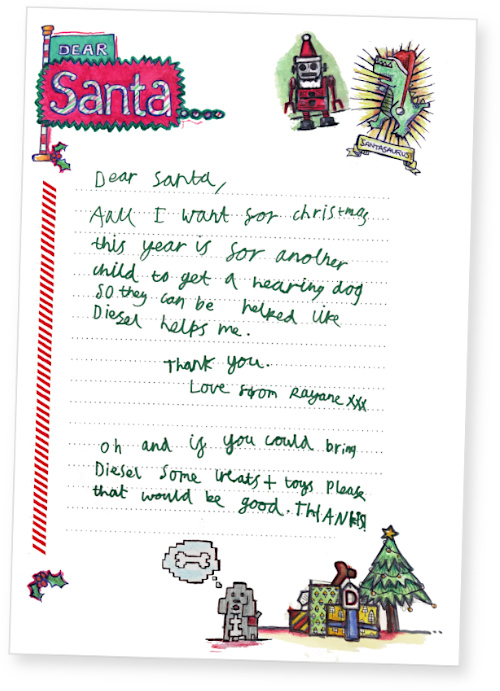