You can provide a deaf person with a lifetime of support

Without my hearing dogs, I do not know where I’d be today. I’ve had very dark moments indeed, when I thought I was going to lose everything, and felt I had no future. I'm in a much better place today – but it’s taken a lifetime of support from kind people like you to get me to this point. 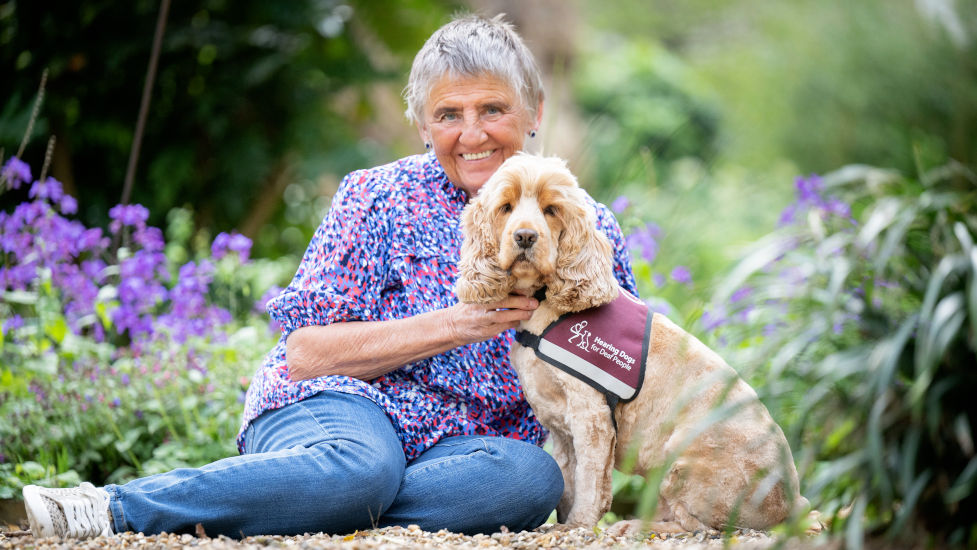 My name’s Kim. I am very much the kind of person who gets on with life, and feel driven to help others. So, even after I lost the hearing in my right ear, I still trained as a nurse.

I vividly remember the day I graduated. It was the greatest day of my life. In 1980 I had an operation on my ear, which went wrong, and I lost all hearing in it. I later suffered nerve damage to my left ear, leaving me profoundly deaf.

However, I took it in my stride again. The obvious answer? A hearing aid. So, I just carried on being a very capable, driven nurse, on many occasions in charge of the ward.

Donate to Kim and Bear’s appeal

I was looking after a patient whose pulse was racing. I called the doctor, and when he handed me his stethoscope, he noticed my hearing aid. He just looked at me and said: “You are a liability to your patients. Your deafness is putting them in danger. You should not be nursing.”

It didn’t matter that I’d spent so many years, treating so many people so effectively: my confidence was completely shattered. I felt I couldn’t stand up to him, or explain that I am more than my deafness.

If you’ve ever had someone say something really nasty to you, you’ll know how devastating it can be, no matter how thick-skinned you think you are. An unthinking, heartless comment can really affect you, perhaps for the rest of your life. 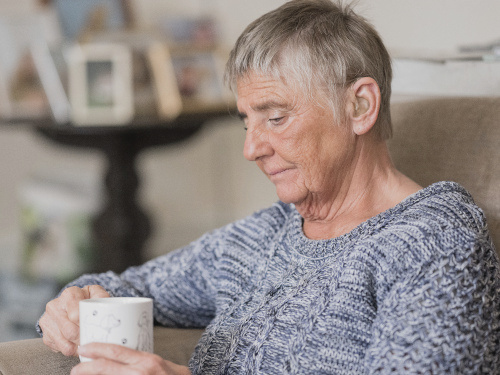 Feeling I couldn’t continue, I handed in my resignation. I still remember the day my resignation letter came back from the Royal College of Nursing, saying ‘Cancelled’ on it. I felt my life had ended: from the greatest high of graduating, to the lowest low of being ‘cancelled’, and nothing more to look forward to. All because of one person’s ignorance of my abilities.

I felt so very lonely, so isolated and worthless.

I hadn’t just lost my job. I’d lost my identity. I actually lost everything that was important to me. In fact, I very nearly went bankrupt.

It just didn’t seem right. It was like a prison sentence. I felt like I’d been punished for something I didn’t do – in fact, for something that had been done to me. I’d been robbed of my purpose in life. I thought I would never enjoy life or do things again.

After helping so many people, when I needed help, nobody was there for me.

Then I found out about Hearing Dogs for Deaf People. I applied immediately. Hearing dog Charlie came into my life in 1994, and he helped me get back on my feet again. 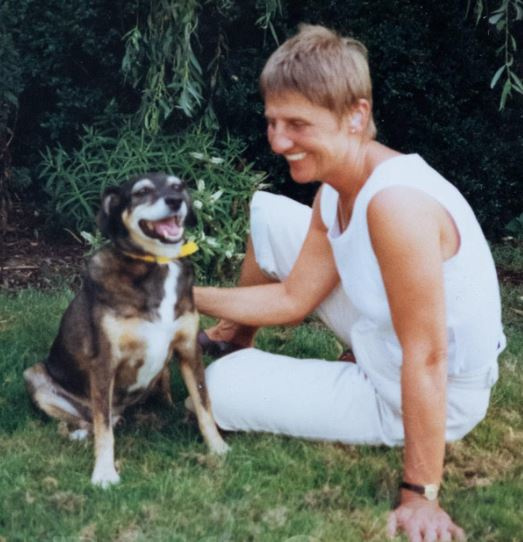 I was so blessed with Charlie – a little dog with so much confidence, he gave me back mine. He made me see that it’s OK to be deaf. I started to believe in myself again, and slowly, through Charlie, I got to know my neighbours better too. Everyone adored him, especially my neighbours’ children.

He would wake me up in the morning when the alarm went off, by putting his paws on the bed, and we would look forward to the day together. Throughout the day, he’d alert me to the doorbell, or the smoke alarm, or a myriad of other sounds. Out and about, so many people would give us a smile, or stop for a chat.

I started to give talks about the Charity at local schools, hospitals and rotary clubs. I even managed to do some care work again. He formed an amazing relationship with children, especially at a local nursery school.

Charlie totally turned my life around. The isolation of those dark days left me. At last, through the generosity of supporters like you, I was getting help.

Charlie was with me for nine years, before being diagnosed with heart disease. When I had to say goodbye to him it was very traumatic. He’d brought me so much joy, and brought me back into contact with people.

The neighbours whom I’d come to know and trust through Charlie were also terribly upset. They held a very moving goodbye ceremony for him in the communal garden, where we scattered his ashes.

It was a tough time, but I still had my confidence and belief in myself. I was lonely but I knew that Hearing Dogs for Deaf People were looking for a replacement hearing dog, which they call a ‘successor dog’. And I’d made so many friends who supported me. I never felt as alone as when I lost my job.

Then along came the wonderful, free-spirited Eva. As soon as we met, our eyes locked, and I knew she was going to be my next hearing dog.

There was unspoken trust and love between us, which grew stronger every day. As well as continuing Charlie’s great work by alerting me to sounds, Eva helped heal the scar from that comment all those years ago – being made to feel you’re rubbish because you are deaf.

I moved onward and upward. In 2007 we were asked to represent the Charity at the Chelsea Flower Show where a single yellow rose was launched called ‘Faithful Friend’, to celebrate the Charity’s 25th anniversary. I started a dog walking business in 2008, which again was such a lovely way to get out and about, say hello to people, and feel a productive part of the world around me.

Eva died on 24th July 2018. This time the garden committee planted an ‘Eva’ rose bush in her memory. We were together for 16 years and completely inseparable. Eva’s trust in me will always be with me.

Donate to Kim and Bear’s appeal

I wondered if I would ever get over Eva enough for me to have another dog, and then along came Bear. From the moment he walked in to my flat he made himself welcome. He just settled himself down, and that was that.

Like Charlie and Eva, Bear has given me continued purpose in life and made a huge difference. He has big pawprints to fill, but that’s OK because his paws are massive! 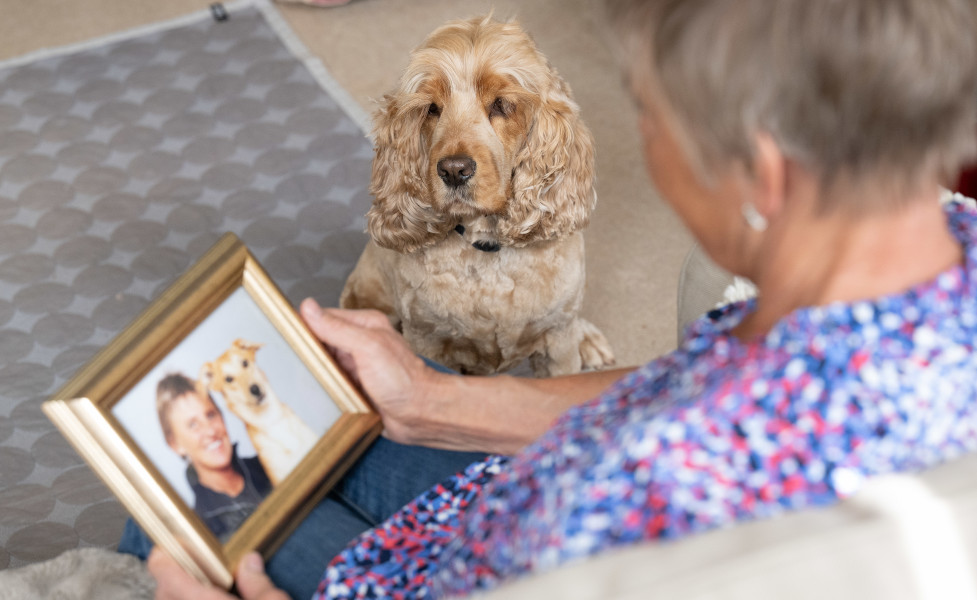 As well as alerting me to sounds, and helping signal to people that I’m deaf, I feel free and relaxed with Bear around. He’s so laid back, and that has a wonderful effect on me too. Day or night, I know Bear is looking after me. He’s my knight in shining armour! More than that, he’s my soulmate.

When our beloved animals pass, I believe they go to a place called Rainbow Bridge, for us to join them some day. In my mind’s eye, I can see Charlie and Eva, on that Rainbow Bridge, paws in the air, going “Yes! Yes! She’s with Bear!”

If I had the confidence all those years ago, that I do now through my hearing dogs, would I have stood my ground? Might I have raised the issue with management?

The truth of the matter is that, for a large part of my life, I have felt like a criminal, in a prison.

Today, I can truthfully say that now I realise I’m not a bad person. I haven’t done anything wrong. I have a right to live, and enjoy life, and this is thanks to the lifetime of support my hearing dogs have given me.

To the people who funded my hearing dogs’ training, I want you to know what your kindness has done. Together Charlie, then Eva, and now Bear, have taught me to be myself, to help people, to be who I am, and enjoy what I have to give. That’s what all your donations do. When kind people like you donate, you change my life, and the impact of your donation lasts for decades.

So I’ve been both terribly unfortunate, and amazingly lucky. That horrible comment about my deafness nearly ruined me, but the support I've received from my hearing dogs for nearly 30 years has been incredible.

It would be wonderful if you could help another deaf person to have a lifetime of support like me, by making a donation today.

Thank you for reading my story. 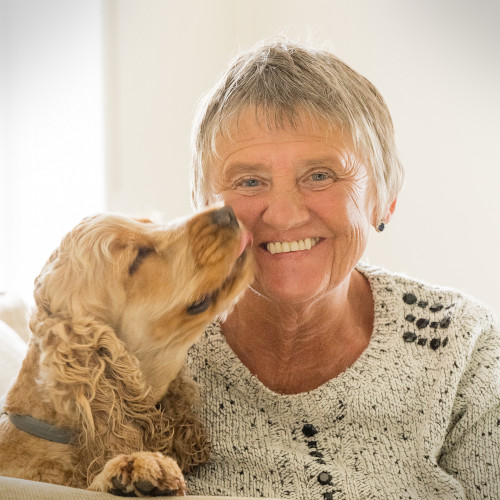 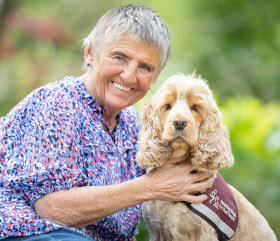 You can help us provide a lifetime of support for a deaf person like Kim. However big or small, your gift will make a real and lasting difference in training more life-changing hearing dogs. Thank you.
Donate to Kim and Bear’s appeal