The impacts of deafness

Deafness does not just affect a person’s hearing. It is an invisible disability that totally isolates people from others. It can cause a huge blow to a person’s confidence and take away their independence. 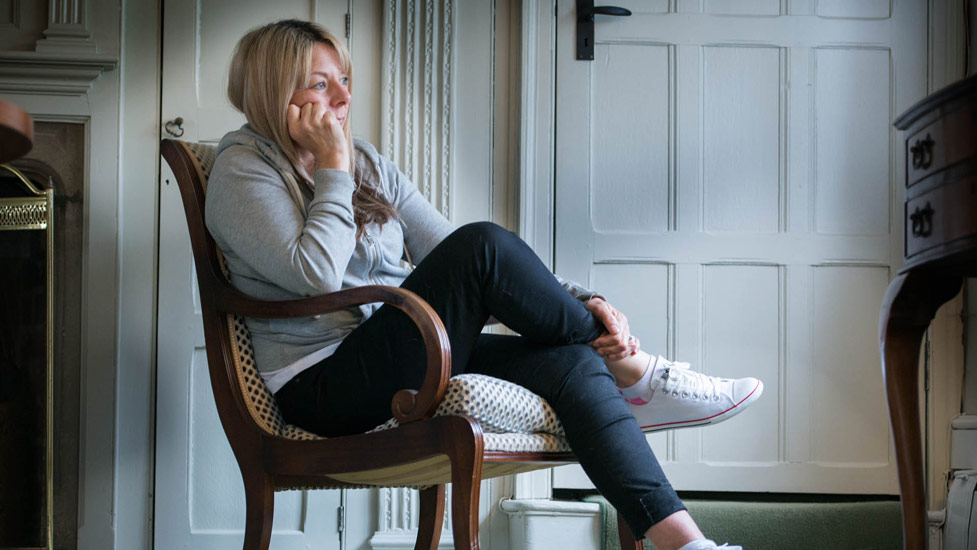 Deafness can also be exhausting. People who suffer from hearing loss are unable to look down at their phones or newspaper and hear what somebody is saying like hearing people take for granted. They have to concentrate on lip patterns to hold conversations, they have to focus on a person’s facial expressions and grasp onto the little sound they can hear and then try to make sense of it all.

This, plus living in constant fear of missing a crucial sound like a fire alarm, can be mentally and physically draining for deaf people.

Not being able to hear sounds is only half the battle for deaf people. Here are just some of the impacts this deafness can cause.

When people come to us for help, one of the most significant problems they can face is isolation and loneliness. Hearing loss detaches people from interactions with others. It makes understanding those who mumble or turn away during conversations impossible. The human world is built around interaction and community support, and deafness can take all of this away. 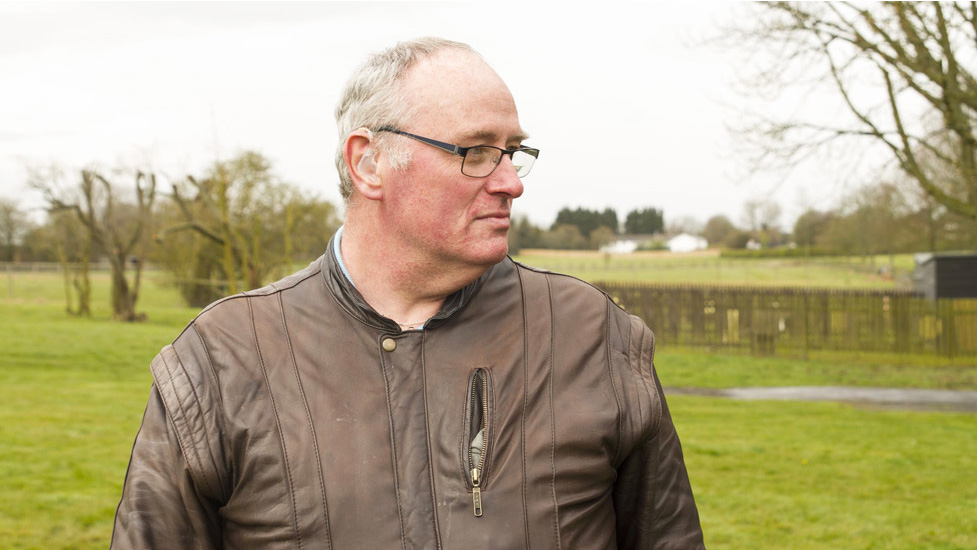 Hearing dog recipient Vincent Wakeling struggles on a daily basis to interact with others, even those in his family:

“I find being deaf very hard, I am aware of how little I understand. I know when people are trying to talk with me that I don’t understand what they are saying, and as a British Sign Language (BSL) user I have the added difficulty of them not understanding me either.

“I feel sad that I cannot communicate easily with people, people seem to feel awkward and that makes me feel bad too. People don’t seem to understand that being deaf is not as easy as they might think.”

Many deaf people often feel extremely vulnerable in a range of situations where sounds are relied on to provide essential information. This can vary from roadside traffic, public announcements in airports or stations to crucial dangers sounds like the fire alarm. 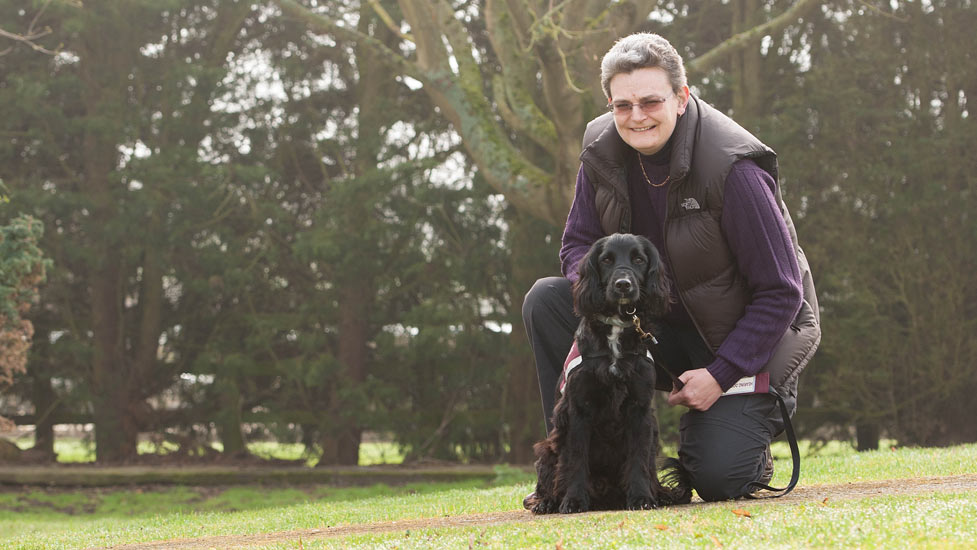 For Caroline Fowler, a number of terrifying and potentially fatal situations practically made her a ‘recluse’ before she met her hearing dog Sam:

“My hearing loss was so severe that I was finding day-to-day sounds really difficult. One day my step daughter, who was only six at the time, ran in saying “Cas the smoke alarm is going off!” This was a devastating wake-up call for me. A six year old was having to keep me safe in our own home because I could not hear. My deafness was not only affecting me but those I loved.

“Around the same time I was nearly run over by a car coming from behind me. If it had not been for a very nice man rugby-tackling me to the ground, I am not sure I would still be here.

“The final reality check was when I realised I was the only person still shopping in an empty Tesco superstore. Unbeknown to me the fire alarm was going off and the store had been evacuated.

“It was then that I knew I needed more support in my life. By the time I applied for a hearing dog, I had become almost a recluse, only venturing to work and back and never going out of the office during the day.”

For a lot of deaf people, night-time can be terrifying. Because you need to take out all hearing aids before you sleep, many deaf people who would usually hear some sounds are transported to a totally silent world. Unable to hear footsteps, outside sounds or potential safety signals like fire alarms means falling asleep can be very difficult. 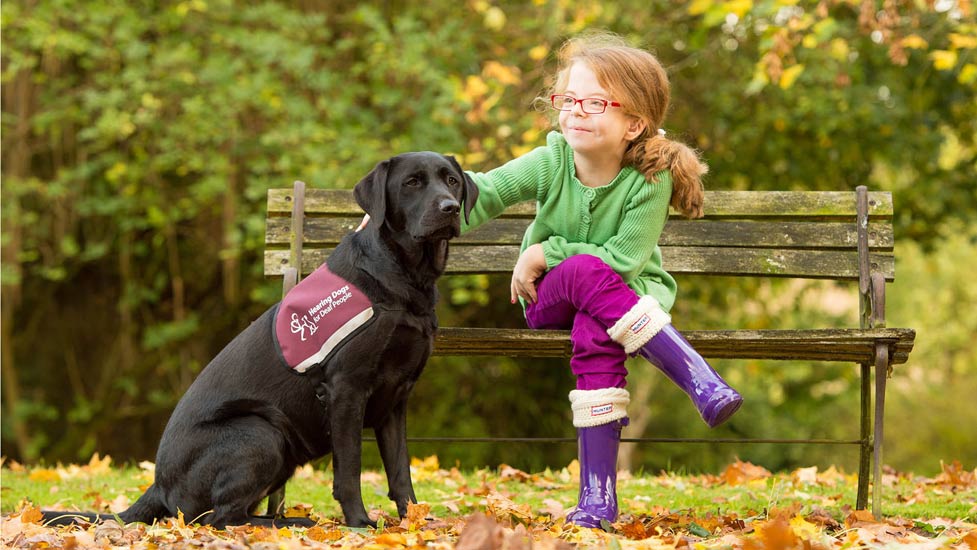 This is especially true for deaf children. Almost every child who we meet talks about how daunting night time can be. They are unable to hear their parents downstairs, they worry the house has been emptied and they’re left alone, and many feel too scared to sleep in their own beds.

Eleven-year-old Polly met her hearing dog Kass when she was eight – but before this she had great difficulty sleeping. Her mum Amanda explains:

“Before Kass arrived, Polly was highly anxious about night-time. She was afraid of the dark and would struggle for hours to get to sleep. Once she’d got to sleep, she would frequently wake up in the night feeling frightened. Polly would even begin to feel anxious in the early evening – way before bedtime. In the end, it was affecting the whole family.”

Tinnitus is a sound that comes from within the ear, rather than an outside source. It is not clear why people develop tinnitus, but it often occurs with hearing loss.

People can experience tinnitus in different ways. People may hear buzzing, humming, grinding or whistling. These sounds can be constant or irregular.

Tinnitus can be extremely distressing for people as there are very few ways to reduce the noise that this condition produces. For many deaf people who suffer from tinnitus, these abnormal sounds are sometimes all they can hear.

Hearing dog recipient Lisa Dower struggled to cope with her tinnitus before she met hearing dog Kelly because of the terrifying noises that filled her head.

She said: “I have what’s called bilateral severe sensory neural hearing loss and intrusive tinnitus. Translated, that means I’m deaf in both ears and have unwelcome sounds in my head much of the time.

“I have worn hearing aids much of my adult life but normal sounds and voices are still inaudible. But because of my tinnitus I can hear loud, mixed-up noises.

“Concentrating so hard on trying to make sense of sounds and conversations is stressful and immensely tiring. And the dark of the night doesn’t give me timeout as my tinnitus fills my head with scary growly and ringing noises.

“Exhausted and worn down with the constant strain of trying to translate a hubbub of sounds into something my brain could comprehend meant I was mentally and physically exhausted and I had a breakdown.”

Hearing dogs can help deaf people faced with these difficulties

Although our hearing dogs cannot take away all the difficulties faced by a deaf person, they can help to reduce the feelings of isolation, fear and exhaustion. All the people whose stories you have just read have been totally transformed since meeting their hearing dogs.

Would you or a loved one benefit from a hearing dog? Find out more about applying for a life-changing hearing dog here. 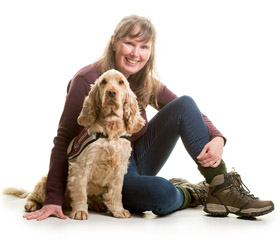 Apply for a hearing dog 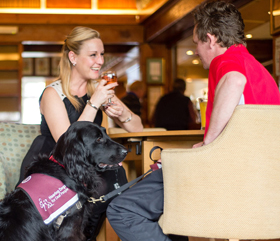 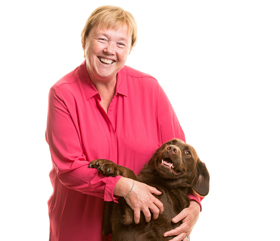 Quiz: How good are you at lip reading?