B&B volunteers Ian & Dee Snudden are the type of people you can really count on. They’re reliable and extremely competent; a community minded couple that - since joining Hearing Dogs for Deaf People in 2013 – have blessed the organisation by simply getting on with it in a low key, unassuming, but ever so helpful and switched-on fashion.

Ian works in Environmental Health at Buckinghamshire Council and Dee is a speech therapist. They are an active family with three young adult children, who signed up to volunteer saying:

“We have always wanted to have a dog but we were unable to commit long term. We heard about Hearing Dogs from a friend and decided that it was not only a worthwhile opportunity to give something back, but also provide a chance for our children to benefit from caring for a dog as well as being involved in a charity. It would also provide a good reason to do things all together.” 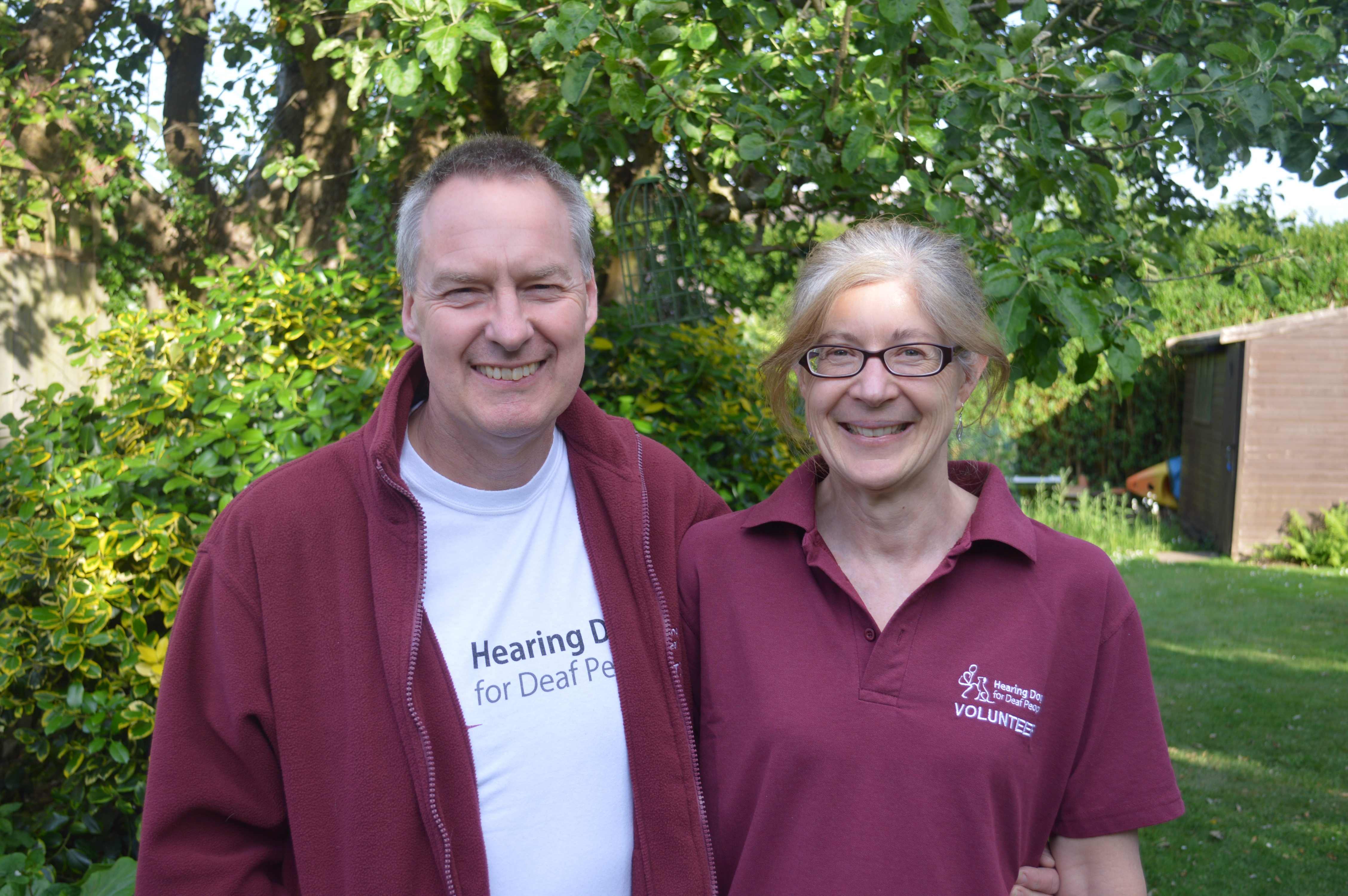 Scroll forward seven years and it’s safe to say that the Snuddens have definitely contributed a lot to Hearing Dogs and sent many a qualified dog on its way, having had the benefit of their kind and caring home to stay in during the latter stages of training.

Eunice Wennberg, training assistant volunteer, carried out their initial assessment: “I remember them describing their busy household with work, school and university going on, but they prioritise their volunteering and have consistently made themselves available, never complaining about a thing – even when a holiday was cancelled to accommodate looking after Toby a bit longer! They’re the sort of people who quietly get on with the job, with no fuss nor drama.”

Amongst all their house guests, Spaniel Toby has been a particular character. Dog Trainer Polly Wren recounts: “Toby is a sweetheart but not the easiest dog to live with. Ian & Dee had to pretty much change their routine, habits and own behaviour when he arrived to suit his various quirks. They never complained and were always happy to do the extra training at home to give Toby the best opportunity to progress. They always go above and beyond and are basically superstar volunteers!”

John Crawford, Dog Welfare Officer, says: “Ian and Dee are friendly B&Bers who have had a variety of dogs over a number of years. They have always listened to the advice given to them and have handled somewhat challenging dogs like Toby extremely well. He was mischievous, loved eating socks and all sorts, but is now doing really well thanks to all their commitment to him and hard work.” 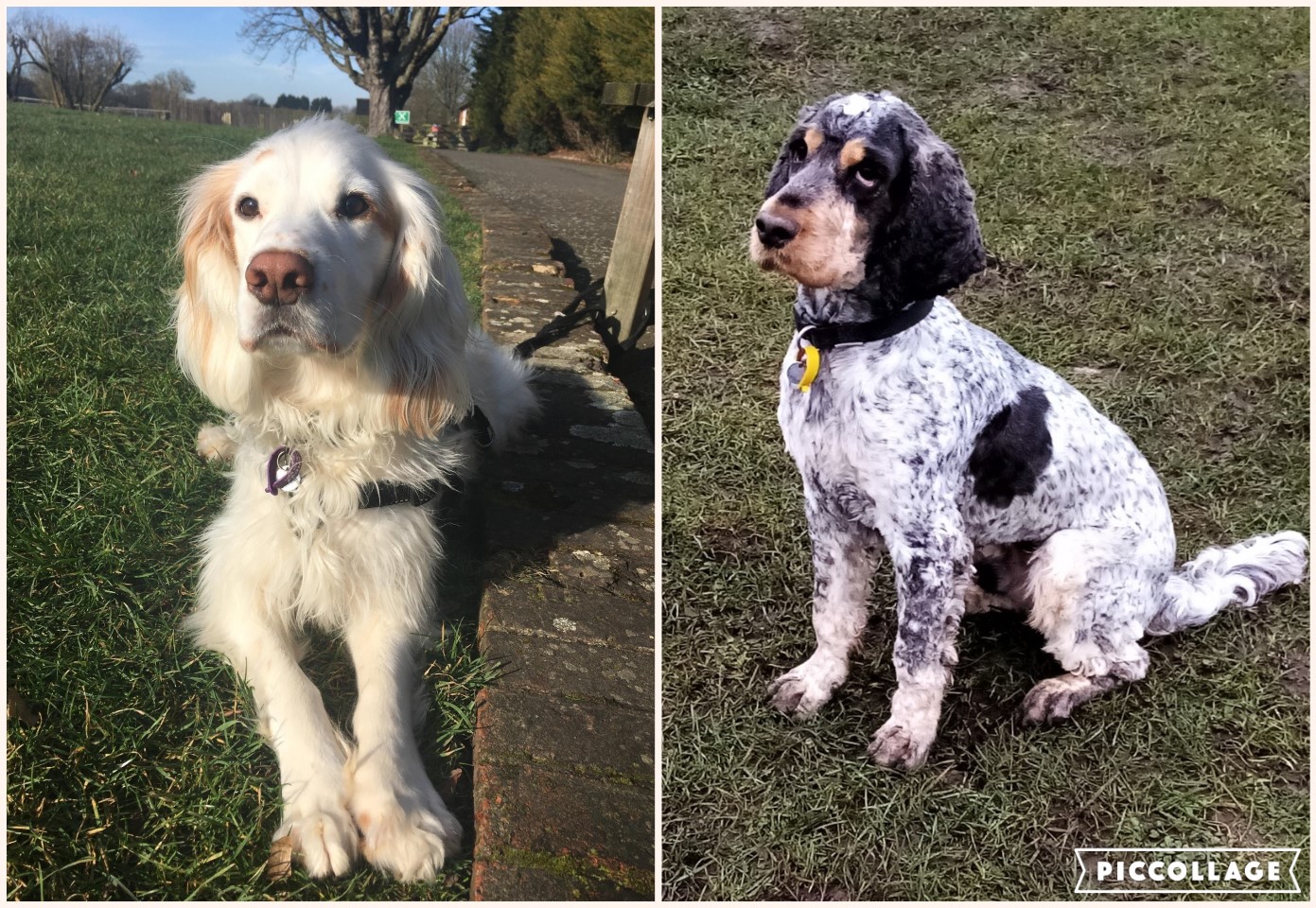 From their first dog Bronte to Sybil who arrived with them last week, the Snuddens have gained a reputation for being well capable of any charge that comes their way. Lauren Carpenter, Trainee Dog Trainer, echoes Polly and John’s sentiments: “Ian and Dee were fantastic for two of my dogs that needed holiday cover, Teddy, a Cocker Spaniel and Cosmo a Poodle. Both not the most straightforward of dogs, but they were very happy to help and followed the advice they were given with no problems or hesitation. They were also great for providing feedback on how Teddy & Cosmo had been during their stay, which I really appreciated.” 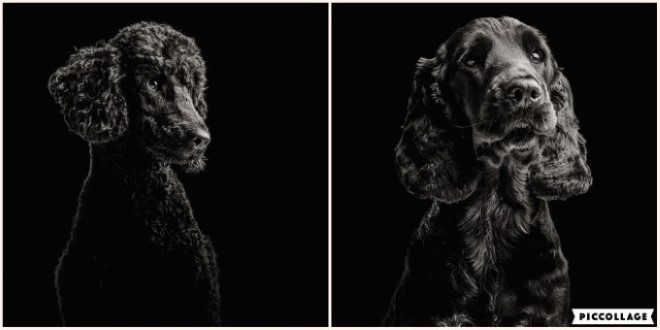 Over and above the dog care, Ian ran the London Marathon for Hearing Dogs in 2014 raising well over £2,000 in sponsorship. Since then, he has perhaps been the event’s most ardent and dedicated supporter – annually taking a place at our cheer point to encourage other runners.

Ian & Dee were some of the first volunteers to come and support Little Grange, our new socially-distanced outdoor kitchen venture, providing positive feedback as is always their way: “Everyone has worked hard and it’s definitely well worth a visit.”

And recently Ian promoted Hearing Dogs through Buckinghamshire Council’s social media during Volunteers’ Week saying: “It isn’t just about the dogs but also about helping a local charity, giving something back to the community and knowing that you have played a small part in changing someone’s life.”

Which is precisely what they did for Declan Sunderland who was partnered with hearing dog Bolt, one of the Snuddens’ trainees, in January this year:

“From the moment I met Bolt I fell in love with him. He has filled a gap that I didn’t realise was there. He is playful, intelligent and loyal. There is a level of isolation that you get with deafness, a feeling of having to make an effort to join in with anything. With Bolt, that feeling is gone. He is with me all the time, loving and watching, playing and waiting for me to join in. I can’t imagine life without him now. He is a credit to the volunteers who cared for him during his training, as he has the most wonderful character and everyone adores him.”

Which of course includes Declan’s wife Jo: “Bolt is the most gorgeous boy and has completely changed our lives. His little sad face hides a very happy boy, who lives for his tummy and is full of energy and joy. We love him so much. He has completely changed our lives in so many ways. I work away a lot and since our sons left home, I have been very uneasy about Declan being at home alone. Whenever he was alone, his deafness put him in danger and Bolt has changed that. I know now that he is safe and never alone. The bond that Declan and Bolt have is amazing. Bolt is such a loving dog and is loved by everyone, even our cat, Charlie. I love him so much, not only for the support and love he has for Declan, but for the fun that he brings to our home and our lives. The homes he had had before coming to us, made him who he is today and we will be forever grateful to the volunteers that cared for him and made him such a loving, devoted boy.” 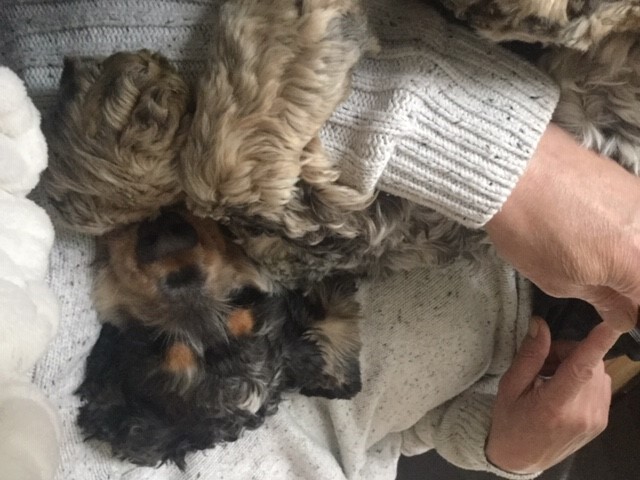