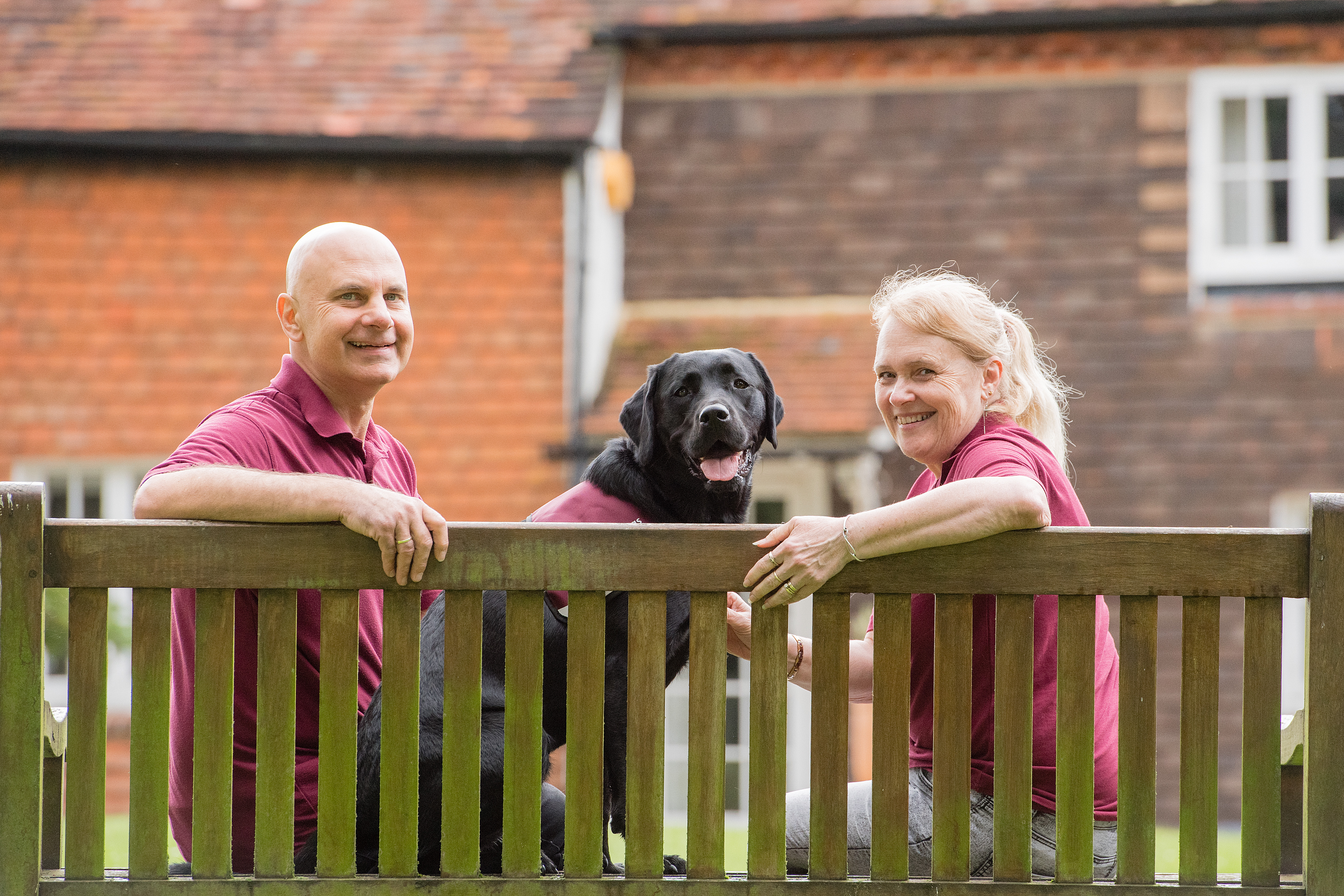 Luckily for us, Debbie and John Patterson spotted one of our Facebook recruitment adverts and approached Hearing Dogs for Deaf People about volunteering after they jointly took early retirement from the IT industry in 2017.

Passionate animal lovers, Debbie and John brought lots of dog experience with them and – like many of our volunteers who generously give to multiple causes – Debbie was already volunteering one day a week at the National Animal Welfare Trust caring for dogs, cats, rabbits and guinea pigs.

Most importantly, they let us know they had plenty of time to dedicate to training and socialising a young dog so we quickly signed them up as Volunteer Puppy Trainers and it wasn’t long before first house guest Damson, a black Labrador, joined them for a temporary stay alongside Yoshi the cat and Fudge the rabbit who have since become fully established in the ‘meeting other animals’ element of our training programme! 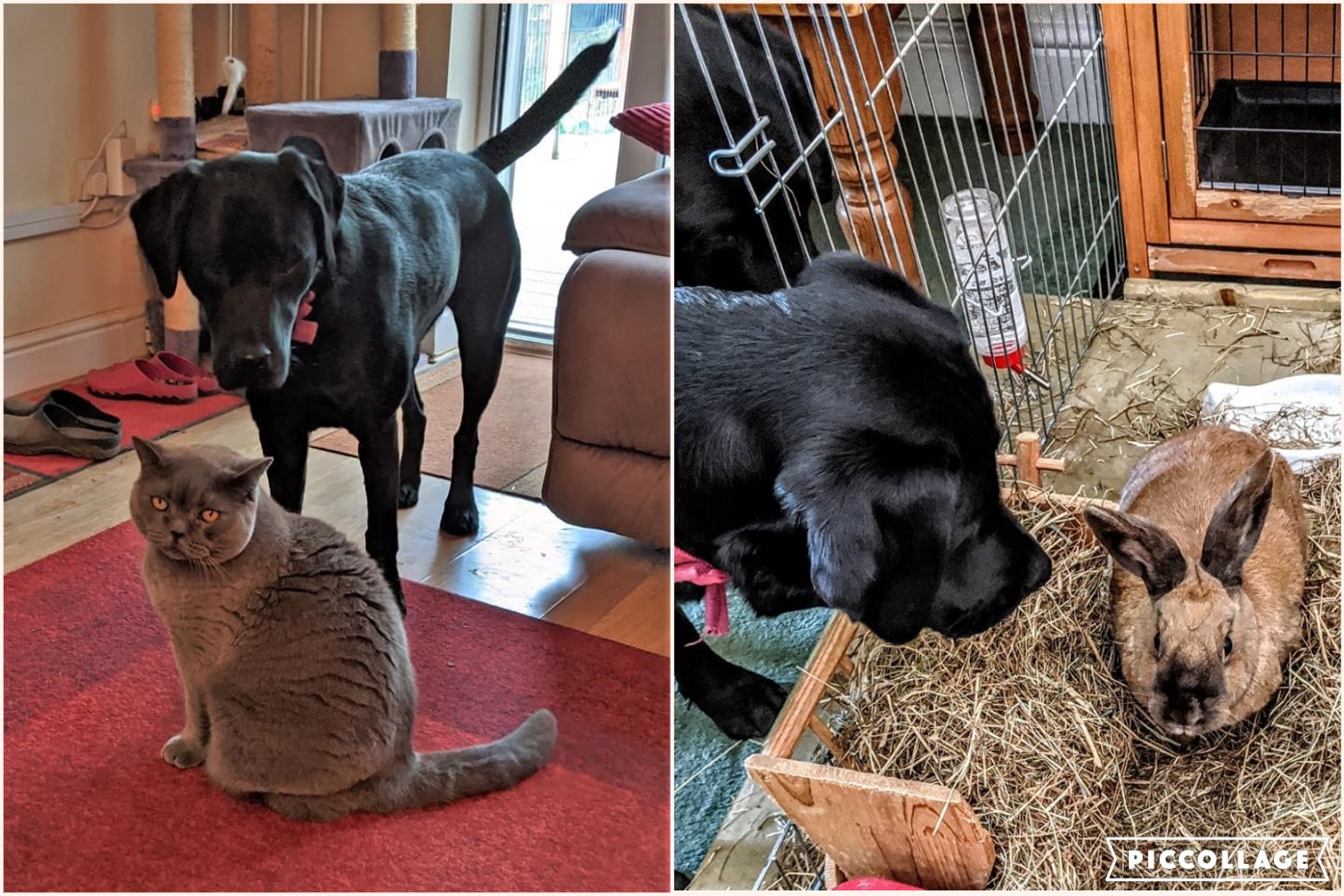 Jay Hrycak, North Bucks Area Training Manager, has followed their volunteer journey: “Debbie and John have been very keen, enthusiastic and dedicated volunteers from the start. They went on a real roller-coaster of learning with their first full-time dog Flash, another black Labrador, who required additional support including regular hydrotherapy sessions for his elbow health. They took on this responsibility and kept a smile on their faces throughout.”

“Flash has since become an ambassador dog for the Charity, lives with the Pattersons permanently and represents Hearing Dogs superbly at fundraising and speaker engagements (when factors allow) raising awareness and winning fans wherever he goes!”

“Two further black Labradors have followed. They have constantly proved their huge level of commitment and are now accomplished Volunteer Dog Trainers with their third full-time and current dog, George, who is progressing through our puppy star scheme to a high standard and achieved his Bronze Good Citizen award – even within the constraints of last year and lockdown.” 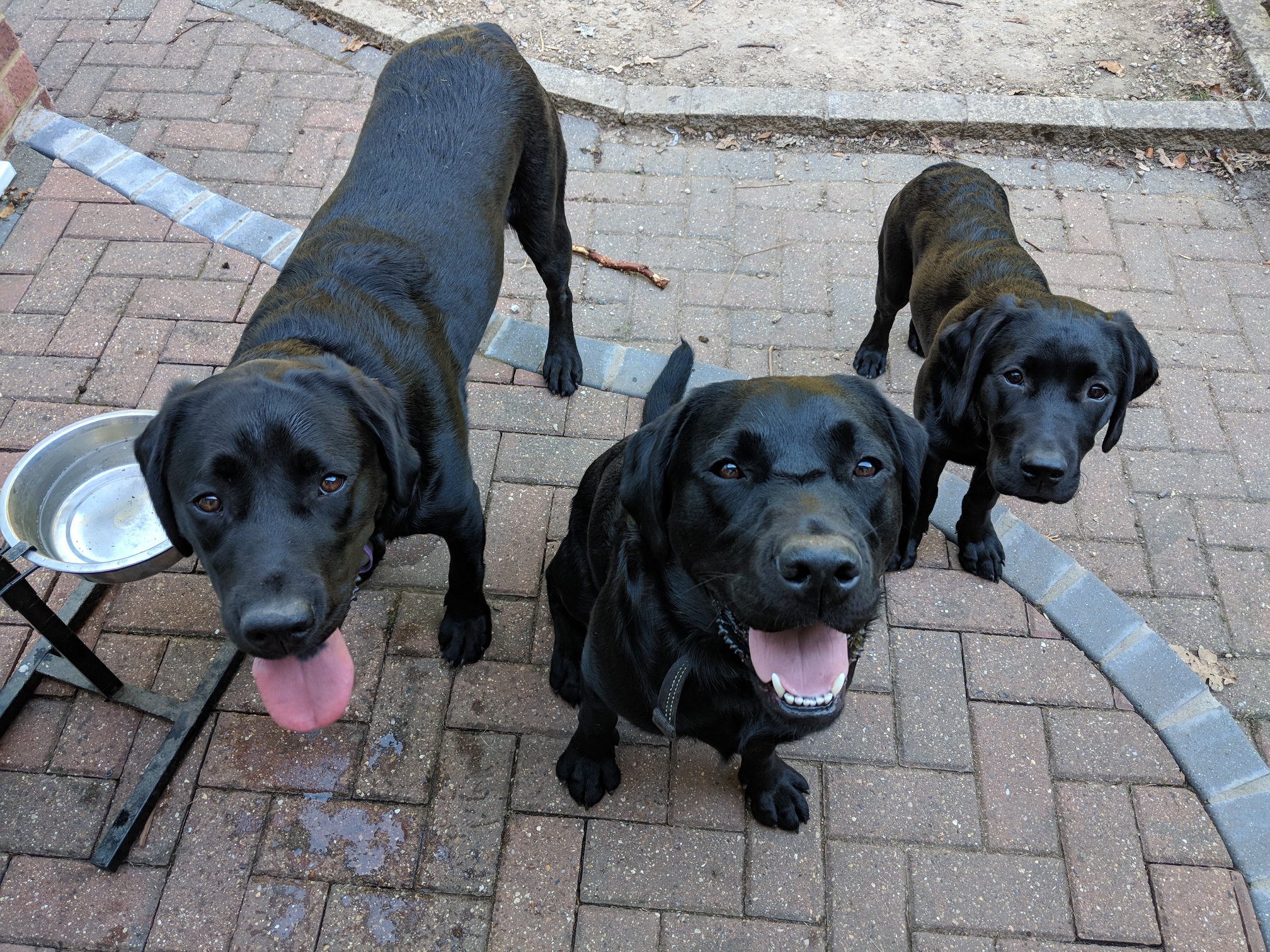 Training dogs has turned out to be just one element of what the Pattersons bring to their volunteering. In looking after a sponsorship puppy, like Vesper, there is a commitment to Hearing Dogs’ wider audience of supporters that Debbie and John embrace with gusto.

“Debbie and John are just brilliant!” says Alicia Shepherd, Production Manager. “Not only as Volunteer Dog Trainers, but also as part of the Puppy Sponsorship team. Even throughout such a difficult year as 2020, they have been very patient and accommodating with all of our many requests for photos and news about the dogs they look after. This has allowed us to continue providing updates and bring a bit of much needed sunshine into our supporters lives.”

Social Media Executive Matt Sadler continues: “With Vesper being a sponsor puppy, it’s vital that her sponsors enjoy the journey through hearing dog training, and Debbie and John have ensured exactly that has happened. Vesper’s ‘Puppy Pen’ updates are always incredibly strong and show just how happy she has been throughout training. This is all down to the photos that Debbie and John have taken and the warmth and love that comes across in their quotes.”

“Debbie and John also play a huge role in helping us to spread the word about Hearing Dogs on social media. They take amazing photos, which are always incredibly successful every time we post them. One was even featured in the Watford Observer recently! They are also two of the most helpful people I have ever met, and they have gone out of their way on a number of occasions to help me any time I have asked.”

The Pattersons’ warmth and kind heartedness really does shine out wherever they go. Kevin Game, Community Fundraising Manager, recalls: “Debbie, John and Flash were at the first school presentation I went to after joining Hearing Dogs a couple of years ago. They made me feel really welcome as a newbie and were excellent with a number of children who were initially nervous about meeting Flash”. 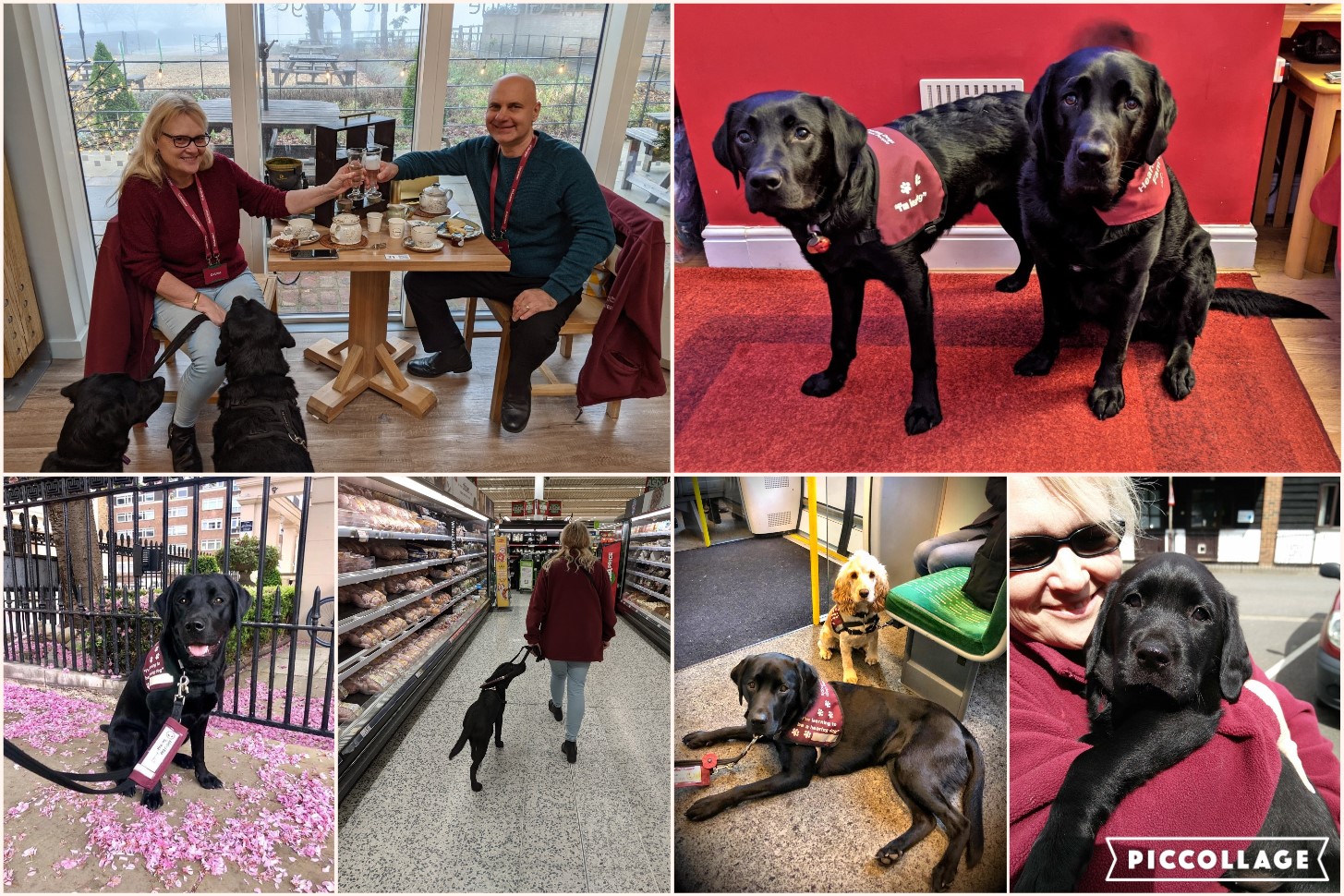 “Fast forward to today and I always hope Debbie and John will accompany me on my speaking engagements. We consistently have a great time and they are totally flexible, happy to do whatever is necessary, always say the right thing and Flash demonstrates whatever is needed. Since that first event we’ve been to other schools as well as a big county event for Cubs. Since lockdown we’ve done virtual talks to various groups and even though we are in separate locations they join in seamlessly. I couldn’t wish for better speaking partners.”

Debbie and John’s good-naturedness has made them many friends in the Hearing Dogs community, perhaps most significantly with fellow volunteer Zoe Simmons:

“Well what can I say about these two? An awful lot as it goes! I met them through Hearing Dogs only a couple of years ago, but we have become such great friends that it’s like we’ve known one another forever. Not a day goes by where we don’t talk. They have a great sense of humour and often leave me in fits of giggles, but equally whenever I’ve had doubts or been feeling low about training of one of the dogs they’ve always been there to boost me back up.” 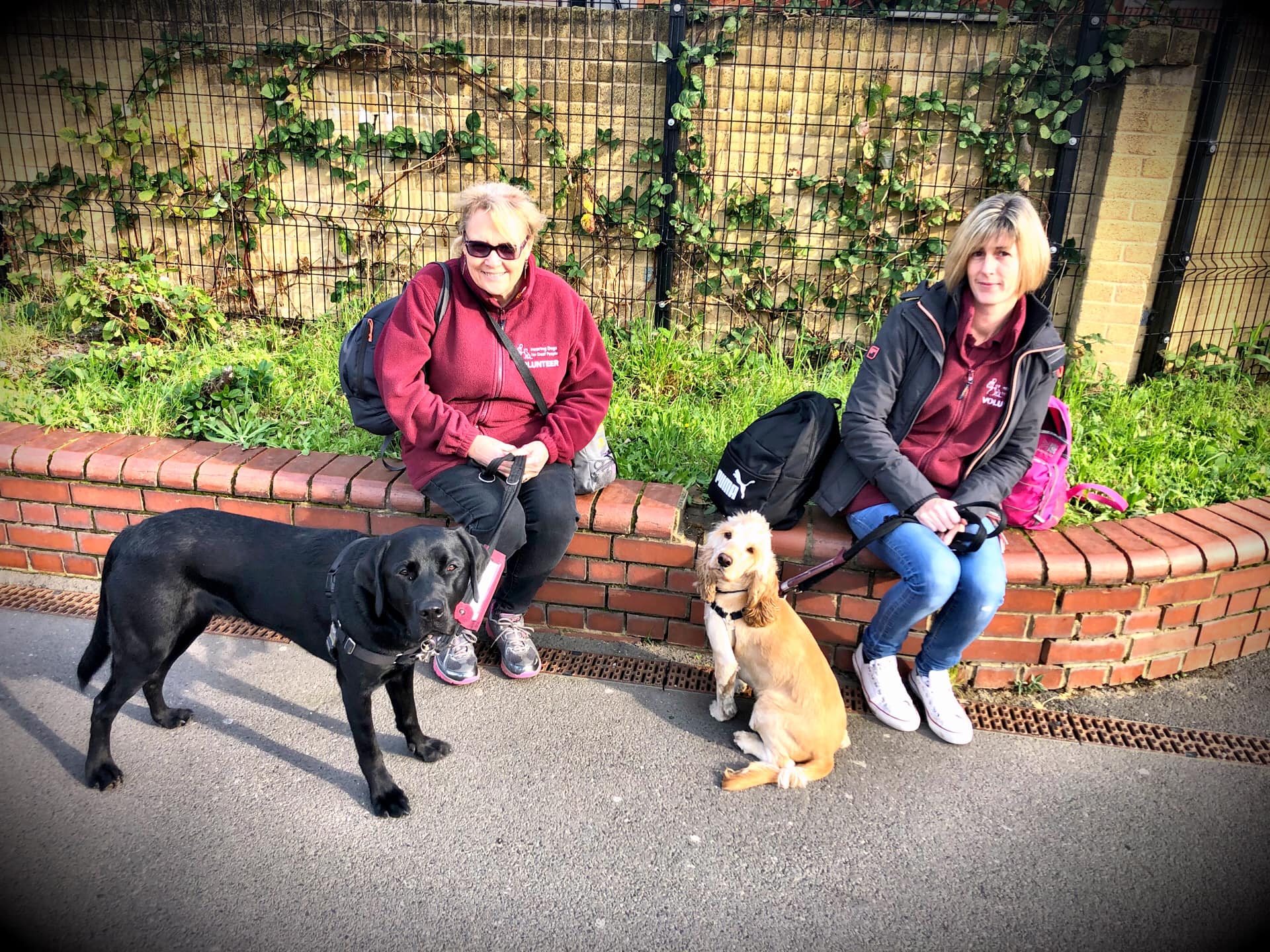 “Flash, Vesper and one of my trainees River were affectionately known as #teambesties and grew up together doing their training, attending numerous fundraisers and even a fan club event we organised ourselves! When River went off to work they were there to offer me tissues and a shoulder to cry on.”

“They have a great way with the dogs and train them with such love and fun. They are the loveliest couple who would do anything for anyone. Nothing is too much trouble and I know they thoroughly enjoy being a part of the Hearing Dogs family.” 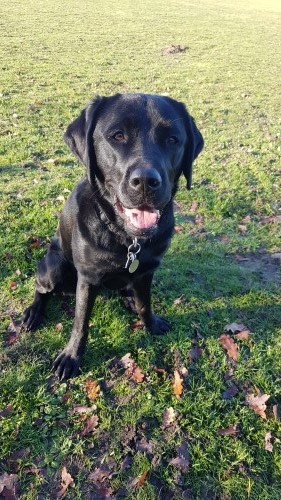 I would like to give my heartfelt thanks for the amazing job you have done in training my hearing dog. She has been a lovely and reassuring companion to have during these times and helped me feel more confident in getting out and about.

We have been enjoying going for long walks together exploring the local parks and countryside. She has also fitted into the family so well as she is such a gentle and affectionate dog, who is brilliant with the children.

I so appreciated the additional details you sent to help me get to know her better and I was truly touched by the beautifully presented photo album of her puppyhood.

Thank you again for everything, Sian.