Angela Johnson, along with husband John, is one of our longest serving volunteers – there’s barely been a day they haven’t kindly been looking after one of our dogs-in-training.

So long is the Johnsons’ involvement with Hearing Dogs for Deaf People, their time with us dates back to the paper files era of record keeping however we estimate there’s been well upwards of 50 young dogs that have happily stayed in their home over the past 16 years. 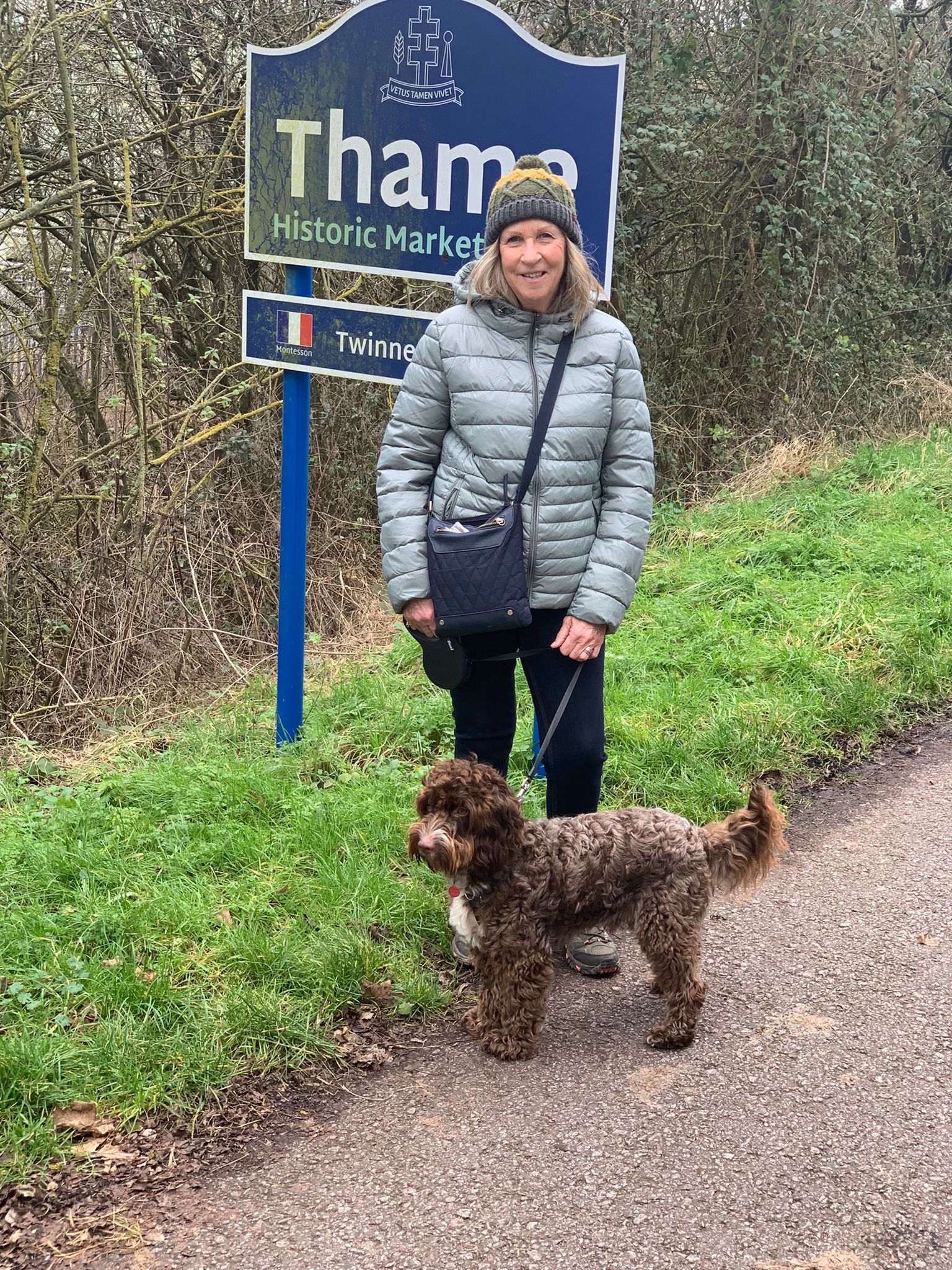 Sarah Allom, High Wycombe Area Training Manager, has followed Angela’s history with Hearing Dogs: “She has supported the Charity while working, bringing up her children, leading a busy life and more recently, sadly through serious health issues that have affected both herself and John. Angela is one of our most valued volunteers, trainers and friends.” 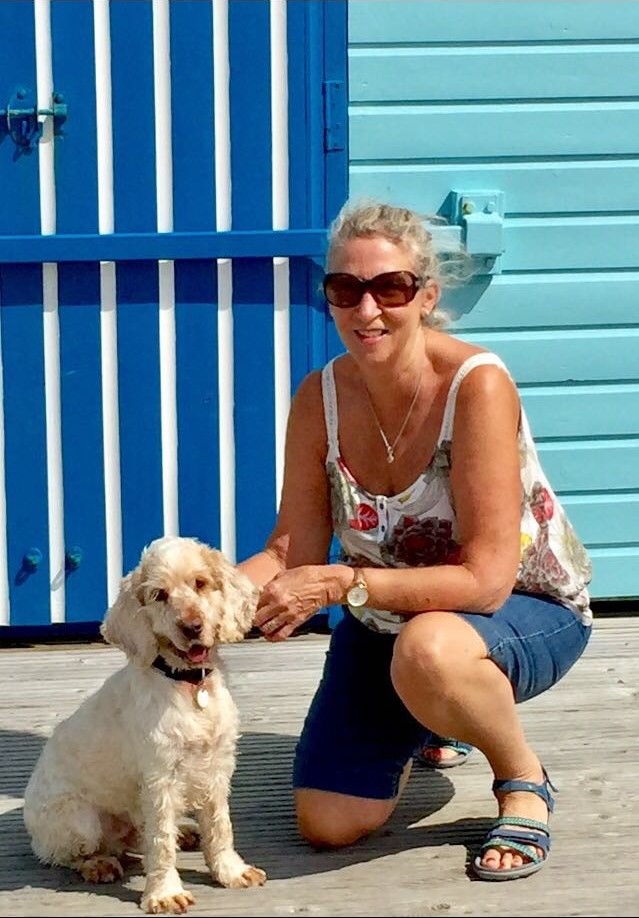 Living close to our training centre, Angela’s sunny smile and chatty personality are well known in our midst. She has been hugely supportive of The Grange Restaurant & Gift Shop since inception; regularly lunching with us, stopping for a coffee and introducing newcomers to the Charity’s welcoming fold.

Janet Knight, Retail Assistant, says: “Angela is such a great ambassador locally for the charity. She often pops in, in fact I first met her when our former shop was located next to the kennels where she’d call in if ever there was a wait to pick up a dog she was looking after. Angela has been involved with Hearing Dogs during both happy and difficult times in her life. I know it’s a place of solace, and we are always delighted to see her.”

Like many of our volunteers, the Johnsons are involved with other charitable organisations like PACE children’s charity, as well as enjoying a wide variety of interests. Whilst volunteering her administrative skills in the Volunteering Department, Angela would delight the office with fabulous tales and photos from regular parties, festival going, a star turn at the Kop Hill Climb, and a magnetic ability to search out celebrities! 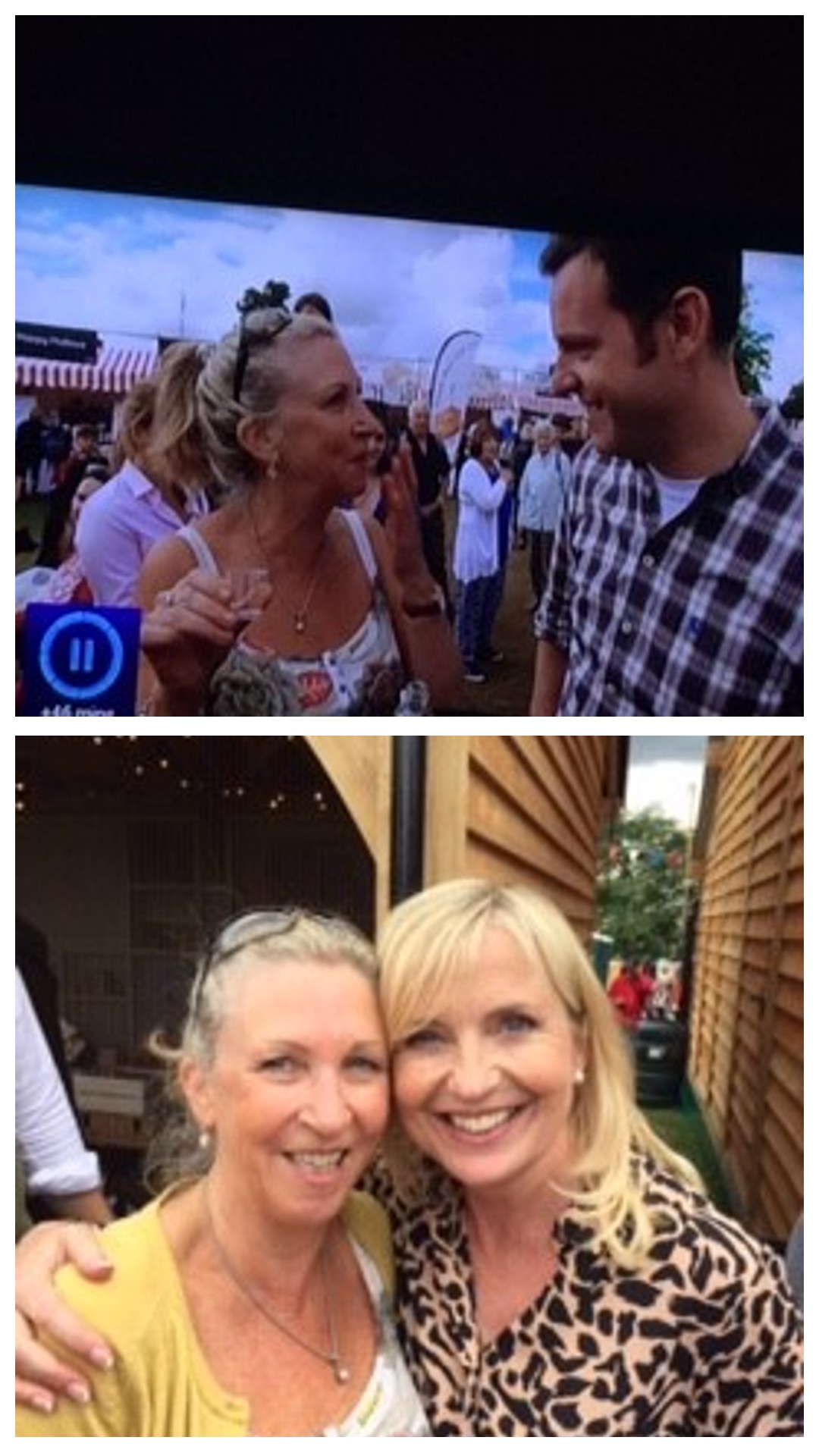 “Angela is one of those people who is good fun to have around” says fellow volunteer, Eunice Wennberg. “She and husband John are keen volunteers, both very friendly and approachable. They have evolved their dog care volunteering from the Bed & Breakfast scheme to Training from Home as their work and family life has changed over the years.

Angela and another volunteer Jill Roarty, who used to be neighbours, always had a private competition over who would win the best cake competition at volunteer parties. Such fun times. In 2015 Angela took first prize, hence the bottle of wine! 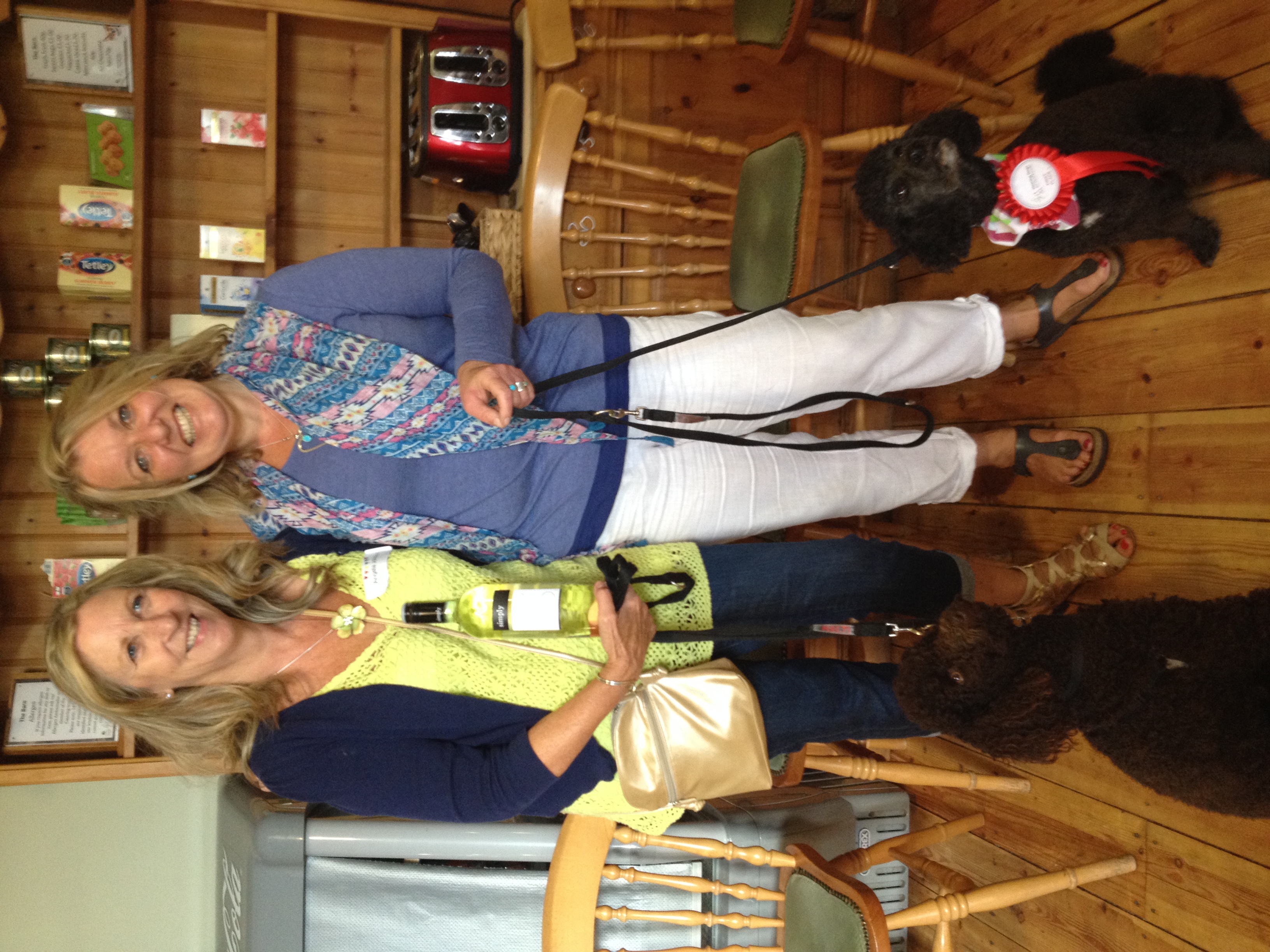 I remember Angela hated having breaks between dogs; by preference she would literally hand one back in the morning and pick up another on the evening of the same day! They took the trainees everywhere with them, so the dogs experienced life to the full.”

More recently Angela has teamed up with Fiona Daniels to form what Sarah Allom describes as a dream team… “Angela and Fiona are two of our longest-standing volunteers, and together they are unrivalled! They have buddied up and are now training their fifth dog in a volunteering partnership that works brilliantly for both of them, and us.

Angela holds the dogs - Leo, Lupin, Alfie, Finbow and current trainee Mitchell - in her home, making sure they have good manners and are easy to live with. Fiona takes them while Angela is working or busy and trains the hearing dog skills they need for eventual placement with a deaf person. It’s like a two-for-one deal, and their success rate is phenomenal!”

Fiona confides: “Finbow was definitely the cheekiest dog we’ve co-trained - very puppyish; playfully pinching anything such as shoes or socks left lying around!” 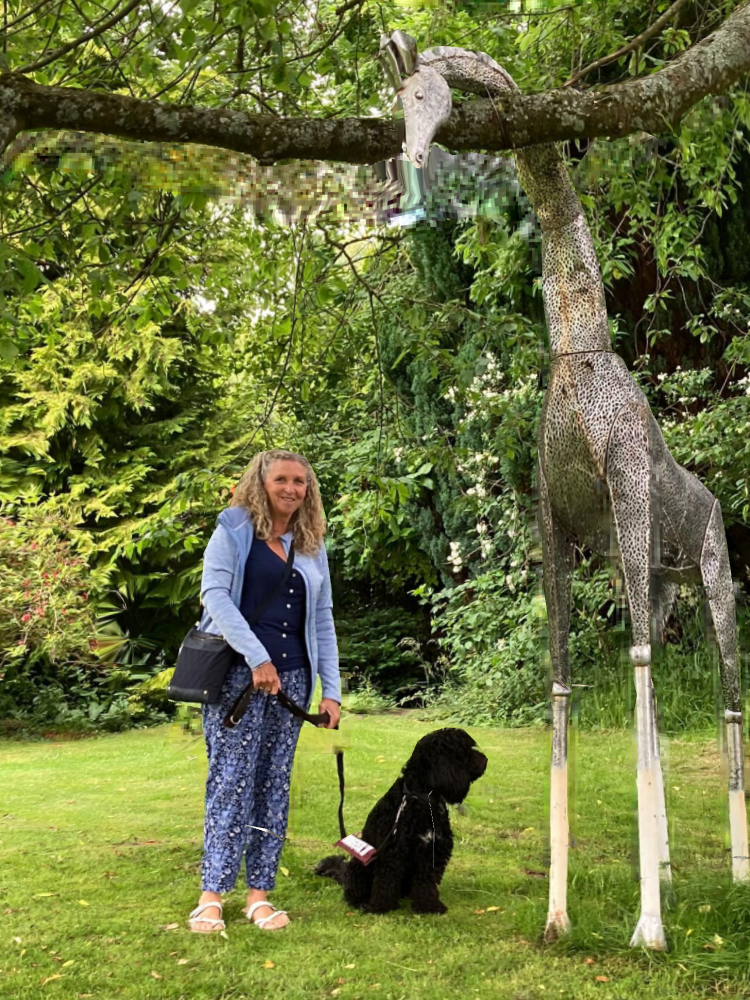 Lauren Carpenter, Dog Trainer, has known Angela since 2017 when she first started working in the Welfare department: “Angela has always been a really approachable and friendly volunteer. She’s great in following all advice without hesitation and she simply adores looking after the dogs!

She has had so many for us over the years, including the lovely Comet who we both enjoyed when I was his Welfare Officer, and more recently Lupin and Alfie who I helped with some aspects of their training and placement.

Angela is a very committed volunteer who has embraced the necessary changes throughout the pandemic, and those related to her private life, all with a massive smile on her face.” 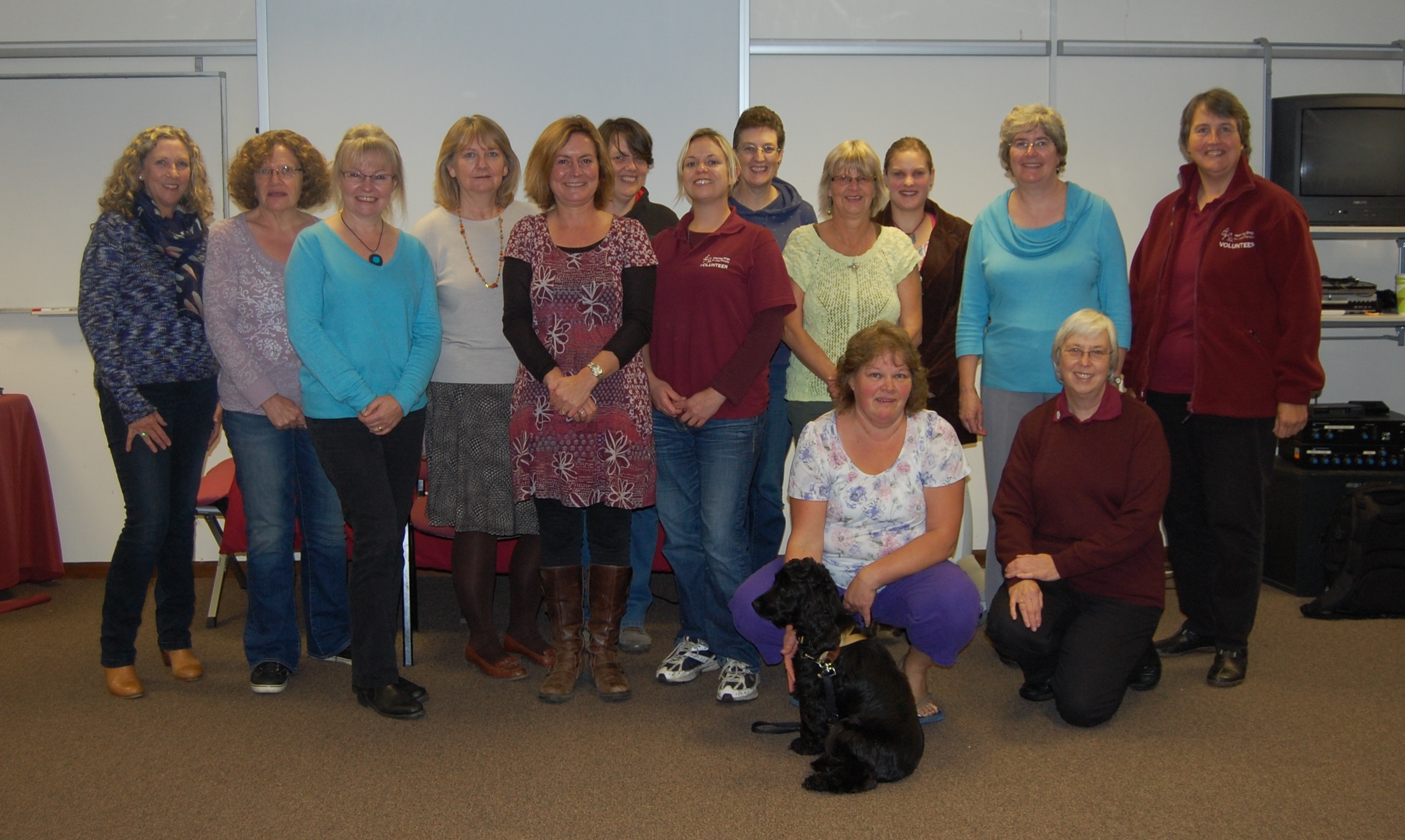 Committed to our cause, Angela joined deaf awareness and basic British Sign Language classes after work in 2014, supported numerous events, attended Great British Dogs Walks and the Hearing Dogs Awards, starred in photo shoots and never misses a trick in recommending Hearing Dogs to others for anything from volunteering opportunities to a great cup of coffee in our restaurant!

Angela Brazier, Front of House Executive, recounts: “Angela and John celebrated their wedding anniversary with a Sparkling Afternoon Tea here just before Christmas, however I originally met Angela when she offered some holiday cover to my first ever Training from Home dog, Tinker. I felt like a complete amateur in her presence as she has looked after so many dogs and was a complete professional!”

Knowledgeable, capable, committed and just one of the nicest people you could hope to meet. Here’s to rounding up the Johnsons’ trainee list to at least one hundred - we certainly won’t ever let Angela retire from volunteering, that’s for sure! 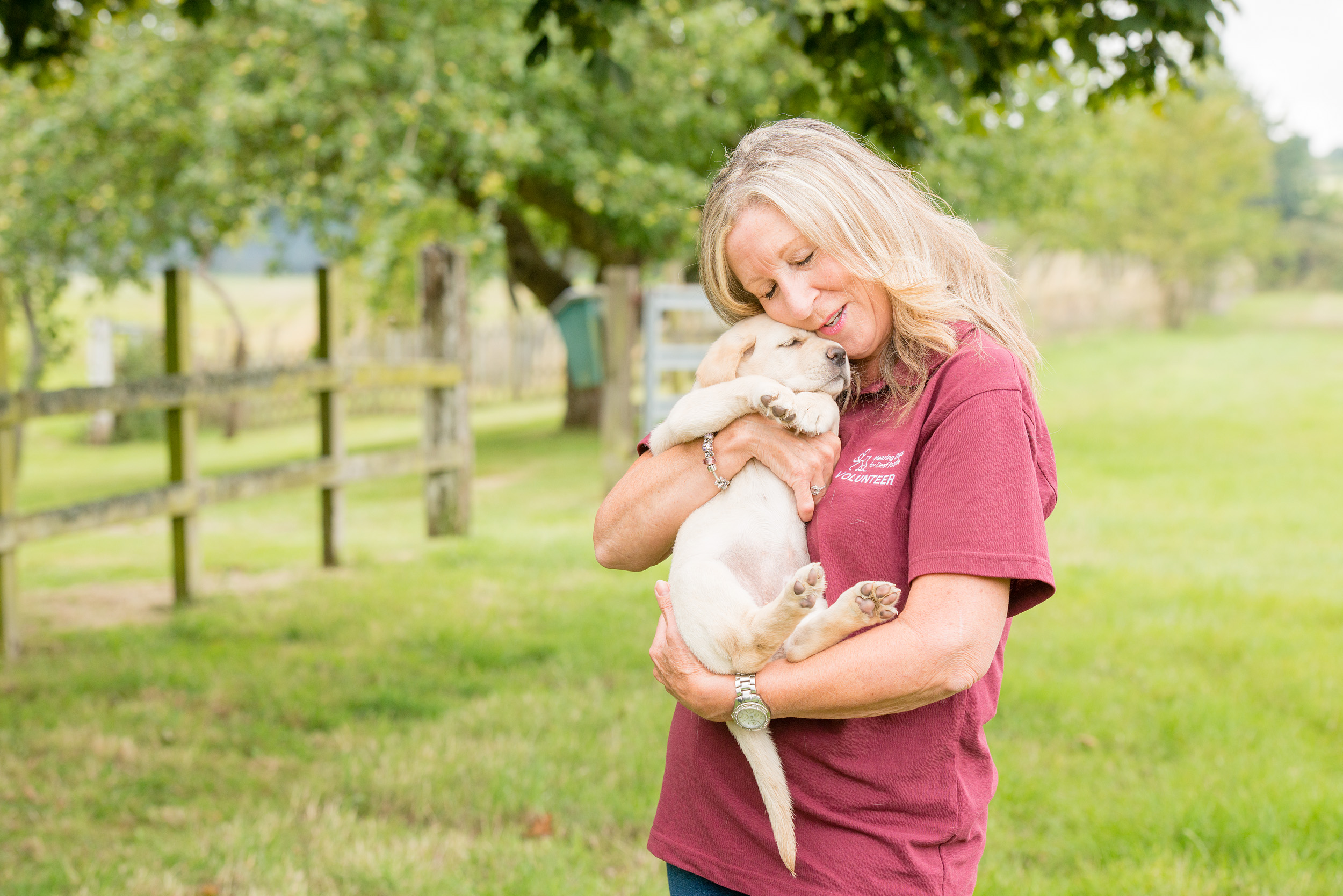