Every month the Chief Executive of Hearing Dogs for Deaf People and the Head of Volunteering come together to pick out a volunteer who has done something exceptional, consistently goes the extra mile, lives and breathes the charity’s values, has given exemplary long service or whose understated volunteering should be brought to the fore. It is then an absolute privilege to publicly announce this person as our Volunteer of the Month, congratulate them with an award certificate and sing their praises to the rooftops!

As this unprecedented year comes to a close it feels important to recognise someone who has been with the Charity through thick and thin from the very beginning, someone who has literally weathered many a storm at inclement fundraising events, someone who didn’t let Covid-19 dampen their dedication to the Hearing Dogs cause nor their local community.

That special someone is volunteer Christine Wright who has been loyally fundraising and expertly representing Hearing Dogs since the pencil and paper days of our record keeping! Nothing is too much trouble for Christine, she is happy to put her hand to anything and it’s all accomplished with a happy smile. 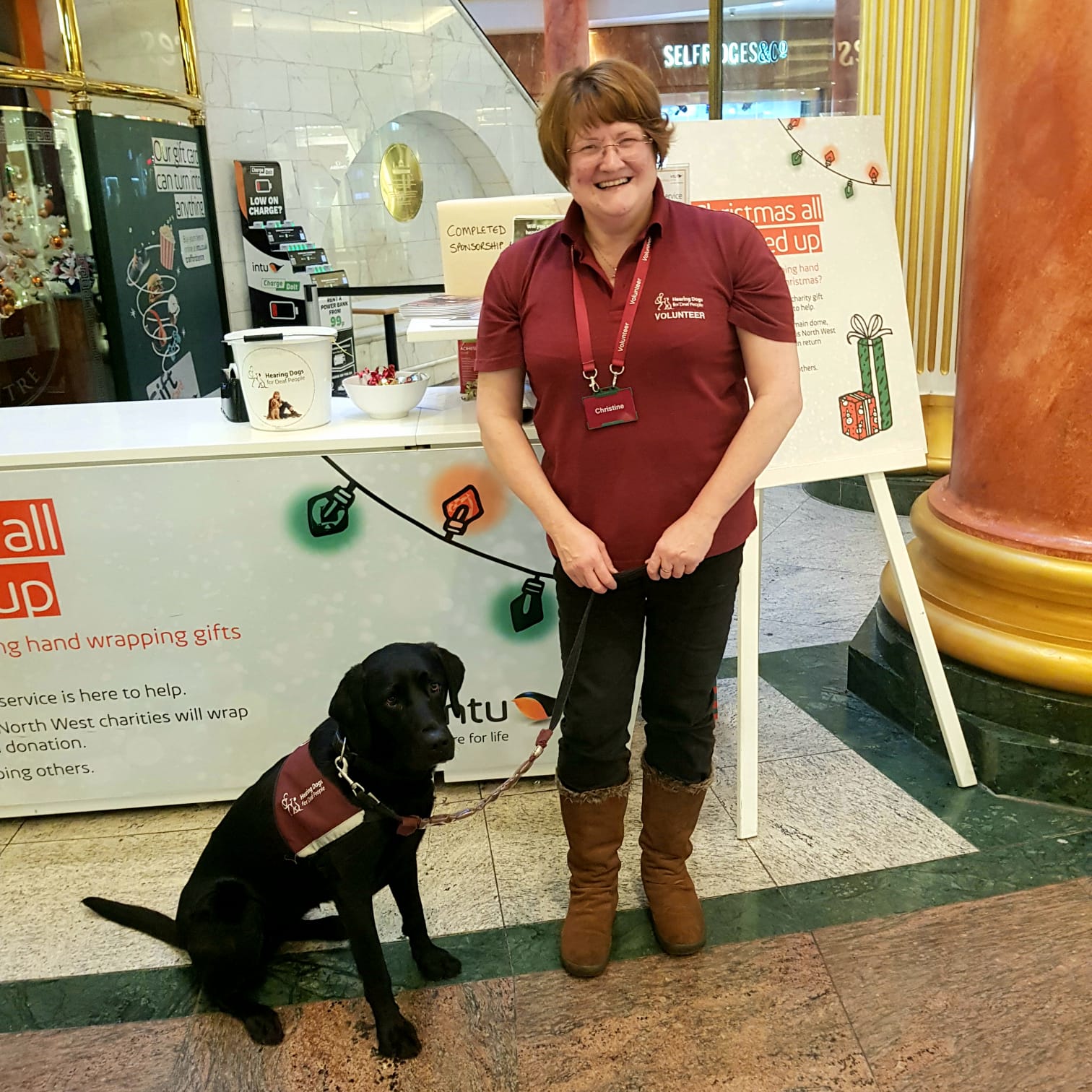 Community Fundraising Manager Gaynor Cavanagh says: “Christine has been the consummate ambassador for more than 20 years – when I took her to Lyme Park this year to plan the Great British Dog Walk they emailed me afterwards with a photo from when she was fundraising there on our behalf over two decades ago! It really hammered home how long her commitment has been."

"She was instrumental in the creation and running of the Stockport Branch and continues to support all our work in this area. She is a wonderful speaker and gets lots of talks by word-of-mouth recommendations as groups find her so interesting and engaging."

"She holds a Paws for Coffee every year, all her own work, which raises over £400 each time and she’s been responsible for donations of thousands more over the years.” 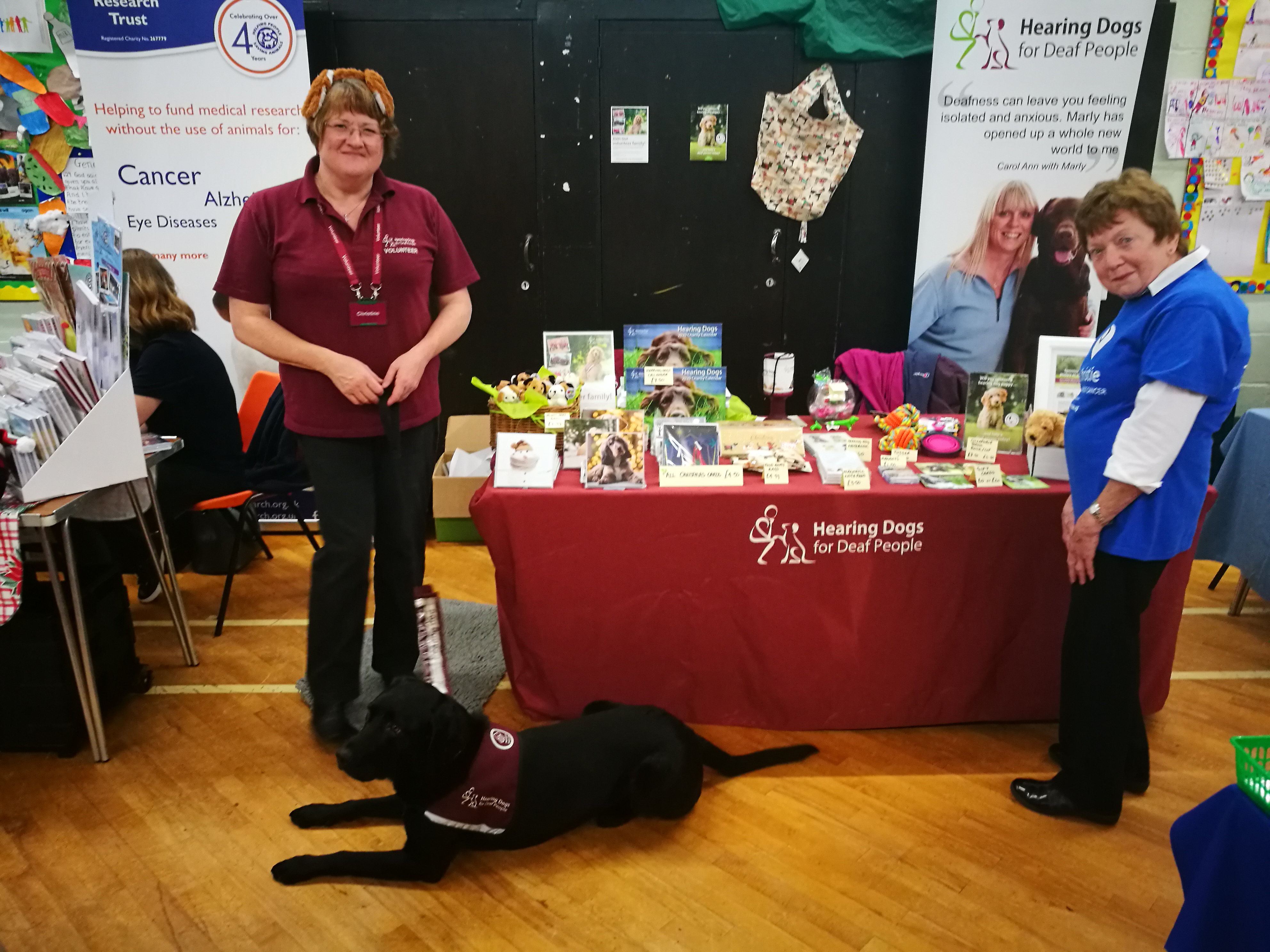 Christine has never let her deafness hold her back – she was a college lecturer and an accomplished graphic designer. Luckily for Hearing Dogs, her professional background led seamlessly to her role as a volunteer speaker. Terry Webb, Cheshire Branch Treasurer, recalls: “I remember very well the time she came with her hearing dog to the annual bridge drive at Ringway Golf Club.  She gave a succinct and effective account in a relaxed and accomplished way about how much her hearing dog meant to her, and having the dog at her side lent authority to her words.  She is undoubtably a first-class ambassador for Hearing Dogs and unstinting in her efforts.”

With her third hearing dog Jessie alongside her, Christine is more than willing to learn new things and ensure she’s using best practice – as Hearing Dogs moved online for much of its activity this year she didn’t hesitate to engage with and start using the new partnership and fundraising Pawtals.

In fact, Christine is completely unflappable and ever professional no matter the request that comes her way. Recently she did a BBC Radio Manchester interview to promote 2020’s Virtual Great British Dog Walks and her own walk by phone which was undoubtably brave, she’s also currently helping with an article for Cheshire Life magazine. These media requests almost pale into insignificance however in comparison to appearing live on BBC Breakfast to support our volunteer puppy trainer recruitment campaign in 2018!

David Robson, Communications Manager, recalls: “Christine was an absolute star when she agreed to go on BBC Breakfast. It’s never easy to do live interviews, particularly on national TV (and especially when it is so early in the morning!), but Christine came across as such a confident, likeable person who spoke with such passion about her lovely hearing dog, and she was undoubtedly responsible for so many people enquiring to volunteer for us having seen the two slots we were afforded. She did the charity proud.” 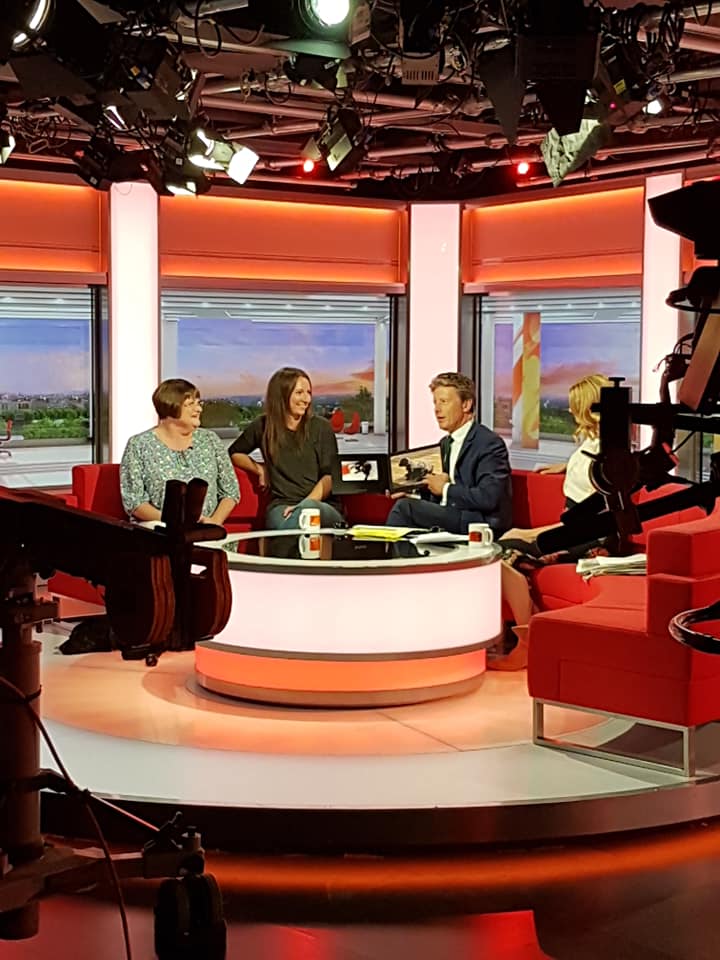 Ruth Turner, Dog Training Instructor, who was also on the programme says: “Christine was a complete natural on BBC Breakfast, she spoke so compassionately about Hearing Dogs and in particular the volunteer puppy trainer who had helped to train Jessie. I found it very admirable how Christine spoke openly about her hearing loss to give the viewers an insight into the challenges faced by deaf people.”

It should be mentioned that as a direct result of Hearing Dogs’ appearance on BBC Breakfast the volunteering team received 250 enquiries specifically mentioning having seen the programme. In other words, Christine’s early start and star turn equated to our most successful few minutes of volunteer recruitment ever!

“Christine is an excellent ambassador for the Charity wherever she represents Hearing Dogs” confirms Bryan Richards, fellow volunteer and Cheshire Branch Chairman. “When Christine was Chairman of the Manchester Branch, she organised a dog walk in aid of the Charity at Lyme Park which subsequently became the venue for the Great British Dog Walk in the North West which she has since played an important part in organising."

"Every year Christine personally organises a Paws for Coffee at her local church which proves very popular and is a great success. She is also a keen supporter of the Cheshire Branch events with hearing dog Jessie by her side doing as much as possible to raise funds and awareness, turning out at sponsored dog walks, local fetes, fairs and the Cheshire Show, as well as corporate events."

"She is an accomplished and well-liked speaker who is able to tell her audience about her life experience as a deaf person and the difference that having a hearing dog has made to her. People always enjoy the practical demonstration of how Jessie helps."

"Christine has always emphasised in her talks that deafness can leave you feeling lonely and isolated. She is the first person to say that a hearing dog not only provides practical support but becomes a much-loved best friend." 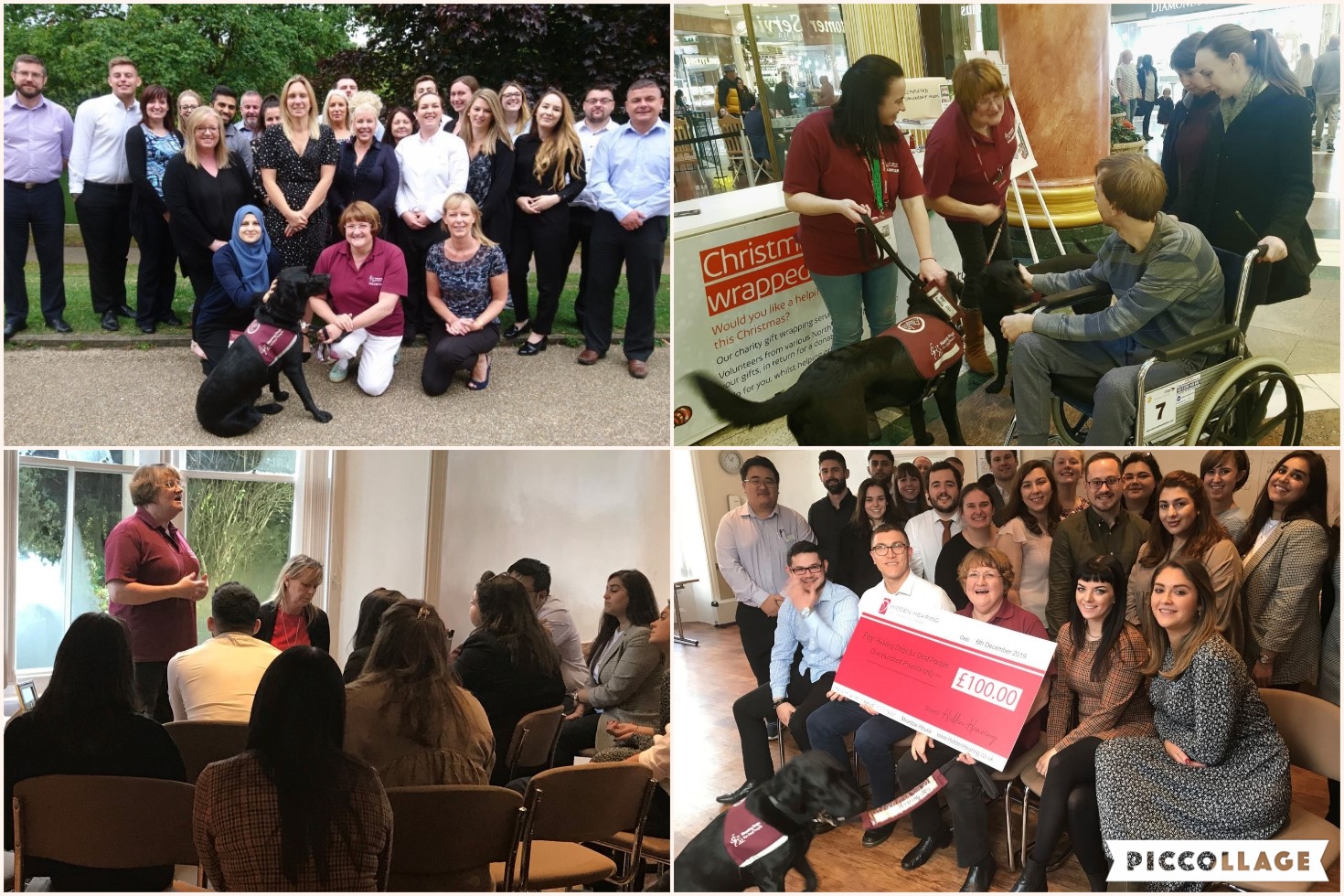 "Christine’s first hearing dog was a Terrier named Jenny who lived with her for 17 years and was her constant companion, when she retired her next hearing dog was a Cocker Spaniel, Benny who sadly had to retire earlier than most following health issues. Christine’s current hearing dog is a black Labrador Jessie with whom she has formed a very strong association and attachment just like the dogs who preceded her.”

Christine mentors new volunteers and is a great role model for young people with hearing loss, showing that nothing can hold you back from achieving anything you want in life. She has a warm and giving personality that is truly appreciated by others.

Lesley Thornton with ambassador dog Abney says: “Christine was the very first hearing dog recipient we ever met.  As brand-new volunteer puppy trainers she came to one of our group sessions to talk to us.  Wow ... what an eye opener and whilst we knew we were doing something worthwhile it was more theoretical at that point until we listened to Christine and began to truly understand what it is a hearing dog means to their deaf partner.” 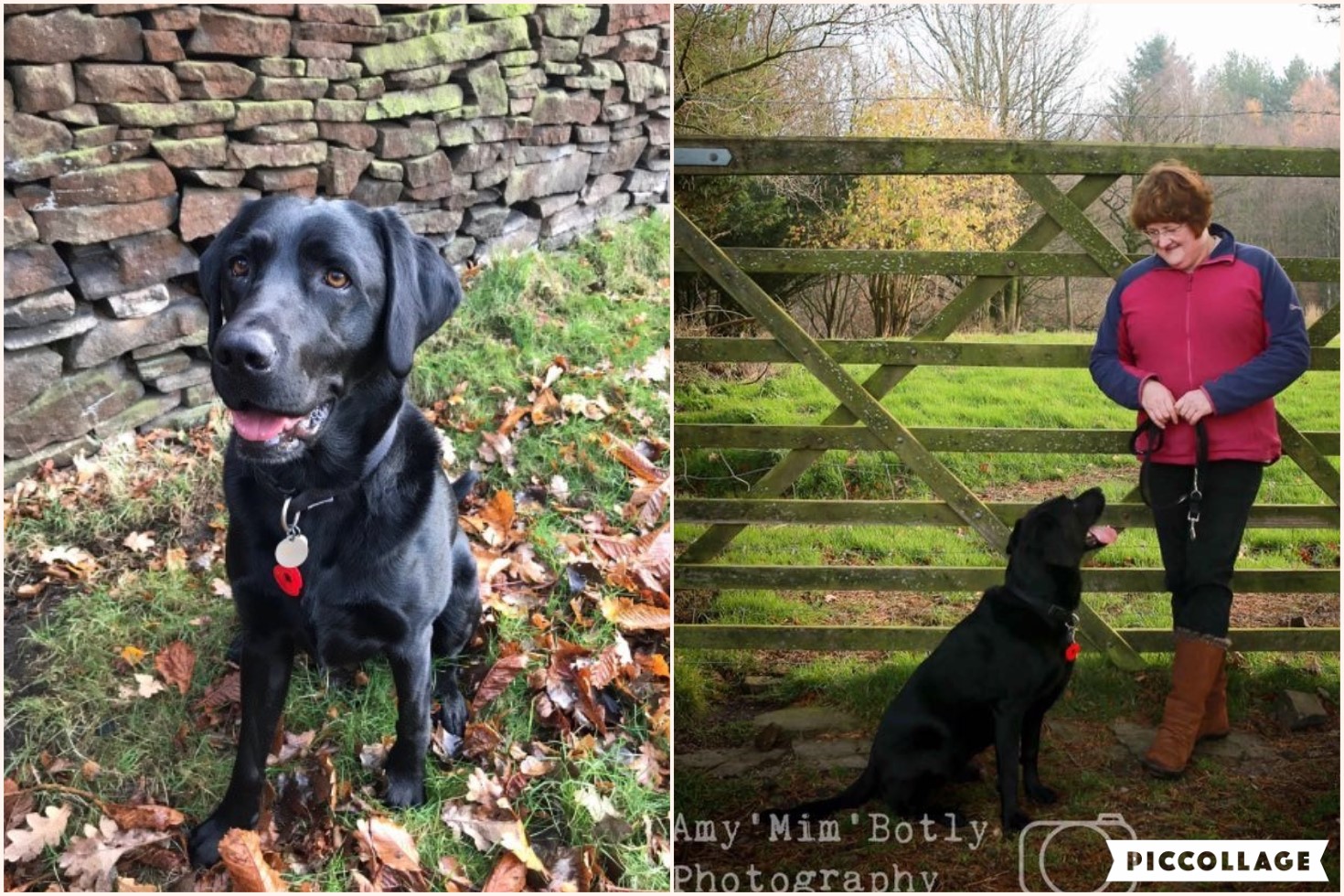 Volunteer Fiona Whitelaw agrees: “Christine is a very warm, supportive person and people are instinctively drawn to her. At our annual Arley Walk, again at the royal anniversary event at the Beatrice Wright Centre and at all manner of fundraisers I have seen her hold visitors absolutely hanging off her every word as she explains how Jessie supports her.”

Christine really does have a gift for effortlessly sharing her kindness and generosity of spirit. It was natural that she would go the extra mile for others during this difficult year – she has been cooking and shopping for many in her local community and of course Jessie has been playing her part too in making people smile too. They are the epitome of a perfect partnership and we are truly privileged to count them as leading lights in our volunteer family. 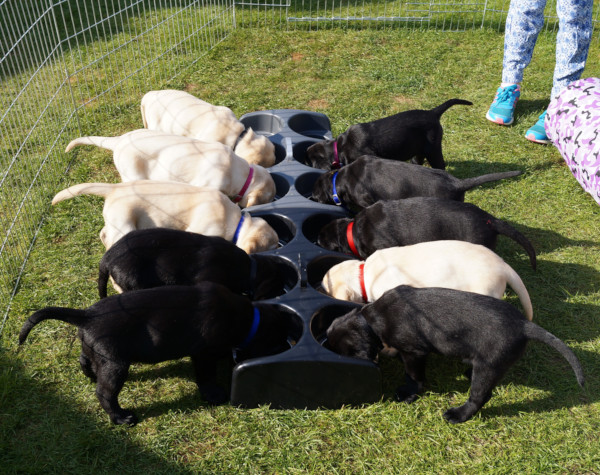 "The J litter was Maggie’s fourth litter and also her biggest! Ten gorgeous pups – six black and four yellow. I was delighted to be able to name one of them Jessie, after the black Labrador that was my beloved family dog when I was growing up.

It means such a lot to know that our little pups have grown up into such beautiful and clever hearing dogs, that play such an important part in lives like Christine’s.

Knowing what Jessie does for Christine and how they give back to the Charity in so many ways makes my own volunteering seem worthwhile and so rewarding. I wish them a very Happy Christmas together."