Seventeen-year-old Sarah was born with a hearing problem and was diagnosed as profoundly deaf as a toddler.

Growing up deaf was hard for Sarah, and she felt lonely and isolated, until her hearing dog Waffle came into her life. Sarah’s confidence has grown so much thanks to having Waffle that she is now one of a team of young people taking part in the Rickshaw Challenge on the BBC’s The One Show, for Children in Need (starting on Friday 6th November 2020). 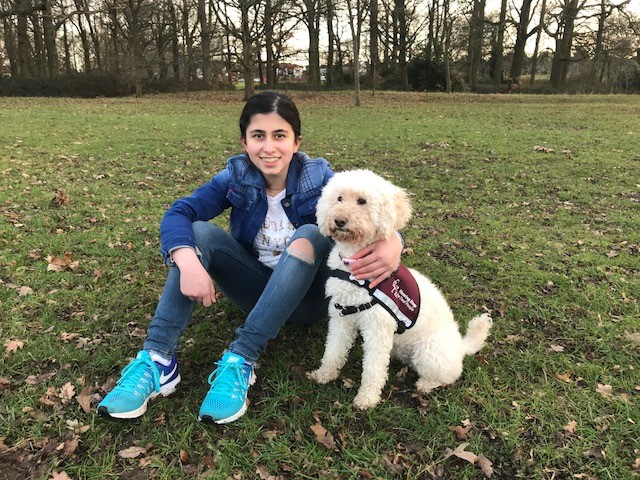 “As a two-year-old, Sarah was babbling away like any child her age. When suddenly it stopped. I took her to our doctors and they diagnosed her as profoundly deaf as she had lost the hearing in her good ear, too.

“As a parent, it’s like your world has come to an end. All of the hopes and dreams you have for your child are crushed. You think; ‘how will they cope? Will they make friends? Will she ever be happy?’ It was terrifying, we felt so helpless.

“At three years old, Sarah went to a mainstream pre-school. You could see she was trying her best to make friends and interact with her peers – but couldn’t. She was using her British Sign Language but the other children didn’t understand, so they would just ignore her. It was heart-breaking.

“She became very isolated – and this became a recurring theme throughout her school years. She felt she couldn’t make any friends – and her confidence to try was broken. She felt extremely lonely – even at her young age.

“Sarah would not make eye contact with anyone. If somebody in the shops tried to talk to her, she would immediately look to her feet. She was completely lacking in confidence and felt very vulnerable in social situations.

“Sarah also grew frustrated with her life as every day was a struggle. Her anger and inability to cope was not like a child her age. She withdrew into a shell and we tried everything we could to help – including getting her cochlear implants – but nothing was shaking her out of this mood. I became more and more concerned for her future.

“Night time was the biggest struggle. Sarah always came into our bed because she was so scared of being left alone in the dark. This constant broken sleep left her exhausted during the day. She would be moody, frustrated and her school work suffered massively as she struggled to keep her concentration.

“I couldn’t wake her up in the mornings. She had no drive or enthusiasm for life – like you would expect from a child aged six or seven.

“All of this, it just had such a huge impact on the entire family. We were all so drained. Every day – every minute sometimes – felt like an uphill battle.

“When we heard about Hearing Dogs for Deaf People – I immediately applied on Sarah’s behalf. 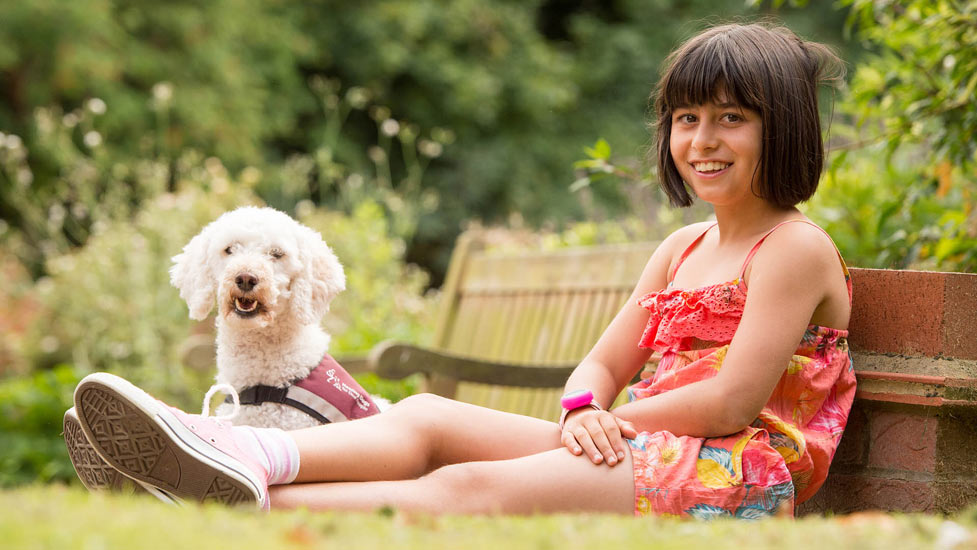 “We first met Waffle in 2013 – just before Christmas. Sarah was nine years old and the issues she was facing as a child seemed to be getting worse, so the timing was perfect.

“When the trainer Sally brought Waffle to meet us and we caught a glimpse of this adorable white Cockapoo bounding past the window, Sarah’s eyes lit up and she said ‘Aww, she’s beautiful!’ It was written all over her face – this really was love at first sight.

“Applying for a hearing dog – to be honest – I thought it would just help us on a day-to-day level. With soundwork and getting Sarah up in the morning. But now, Sarah is a completely different young woman, I realise it’s so much more than that.

“Waffle has enabled Sarah to get a good night sleep in her own bed. It took about a month of Sarah waking up to check Waffle was still by her side, but after that she was getting a full night of quality sleep. It made such a difference – she was more alert during the day and her school work dramatically improved, which was a tremendous confidence boost for her. 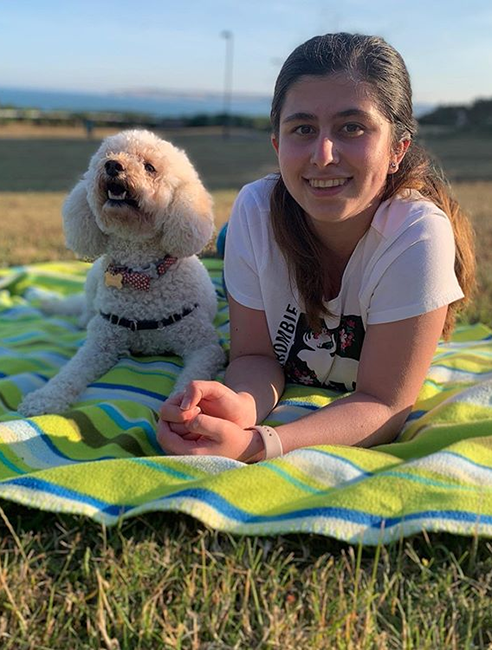 “This little Cockapoo has brought Sarah’s personality out. I never in a million years thought Sarah would ever be brave enough to make friends, but now she has such a close knit of supportive friends – it’s amazing. That would have never happened before Waffle.

“Waffle has also brought visibility to Sarah’s deafness. Before in the shops if someone tried to speak to her, she would look away and avoid the conversation. Now – she will talk for hours about Waffle and all the amazing things her hearing dog does for her.

“Sarah started to feel happy – truly happy – for the first time in her life thanks to Waffle. She considers herself incredibly lucky to have Waffle. It’s changed everything for her. 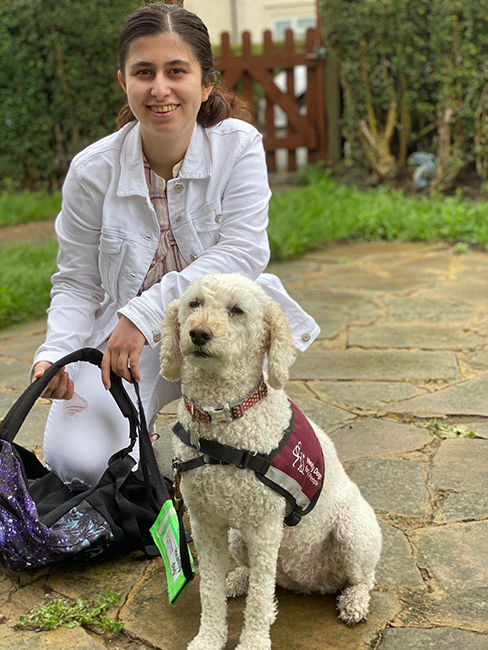 “As her mum, I no longer fear for her future. Sarah is blossoming into a confident, brave and independent young woman – and this is all down to Waffle. I can’t thank this amazing dog enough. She has truly changed Sarah’s life and has given us all a new hope for her future. She has brought life back into our daughter – and for that I am endlessly thankful.

“I’d like to say a huge thank you to everyone who supports Hearing Dogs for Deaf People. These dogs give a deaf person the ability to shine and live their best life. Sarah would have never met Waffle without your support. So thank you, from the bottom of our hearts.” 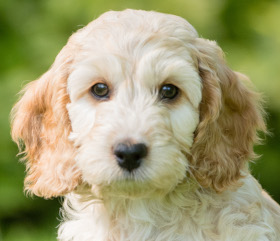 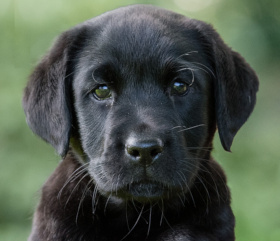 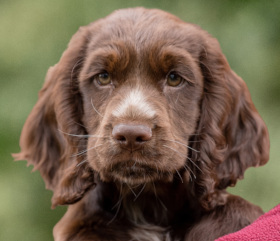 Bertie the Cocker Spaniel loves to help, have fun, and cuddles and belly rubs.

Waffle was the first hearing dog that I sponsored after hearing Adam Wilson giving a talk to our WI group. He had Baxter, his hearing dog with him. I am now on my fifth hearing dog sponsorship and it's so good to see how Waffle has helped Sarah to be the happy, positive young woman that she is now. I wish them both much happiness,

Hi Linda, thank you so much for your continued support! Is it only thanks to our supporters that we can train wonderful dogs like Waffle. Sarah and Waffle really do make an unstoppable team and we are so proud of the both of them. Best wishes, Matt.